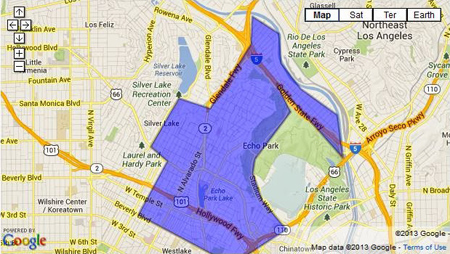 Approximate boundaries of area that would be covered by proposed gang injunction.

Now comes the hard part – keeping the area around the beautifully-restored lake safe for kids and families, and free from gang-related crime.

That is why we were pleased that City Attorney Carmen Trutanich wasted no time in proposing creation of a 3.8 square mile safety zone around the beautifully-restored lake. The gang injunctions that create the zone are designed to keep gang members from associating with each other in the area bounded by the L.A. River to the north, First Street to the south, the 110 freeway to the east, and North Coronado Street to the west.

The state’s Street Terrorism Enforcement and Prevention Act, which allowed for the creation of gang injunctions defines a “criminal street gang” to include any ongoing organization, association, or group of three or more persons having as one of its primary activities the commission of one or more of a list of specified criminal acts; having a common name or common identifying sign or symbol; and whose members individually or collectively engage in a pattern of criminal gang activity. The six rival gangs named in the latest injunction – the Big Top Locos, the Crazys, the Diamond Street Locos, Echo Park Locos, Frogtown Rifa and the Head Hunters – have been feuding for years, endangering public safety.

Los Angeles pioneered the use of gang injunctions in the 1980s as a powerful crime-fighting tool. Since then, they have spread across the country and beyond.

Los Angeles magazine noted in a recent blog post that there are some 44 permanent gang injunctions in Los Angeles placed on 72 gangs. Some of the injunctions prohibit known gang members from traveling in vehicles together, standing together, or even possessing cell phones (certain exceptions apply) inside of the judge-approved areas mapped out by the LAPD or city attorney.

An LAPD map posted online shows all the areas current approved for gang injunctions. The area surrounding Echo Park will be a welcome addition to the map.

The city of Los Angeles owes a debt of gratitude to City Attorney Carmen Trutanich for his commitment to fighting gang crime through the effective use of gang injunctions. L.A.’s streets, neighborhoods, parks and lakes are safer because of gang injunctions and similar proactive measures initiated in the city attorney’s office. We look forward to working with City Attorney-elect Mike Feuer, who takes office July 1 in the City’s never-ending quest to rein in criminal gang activity.