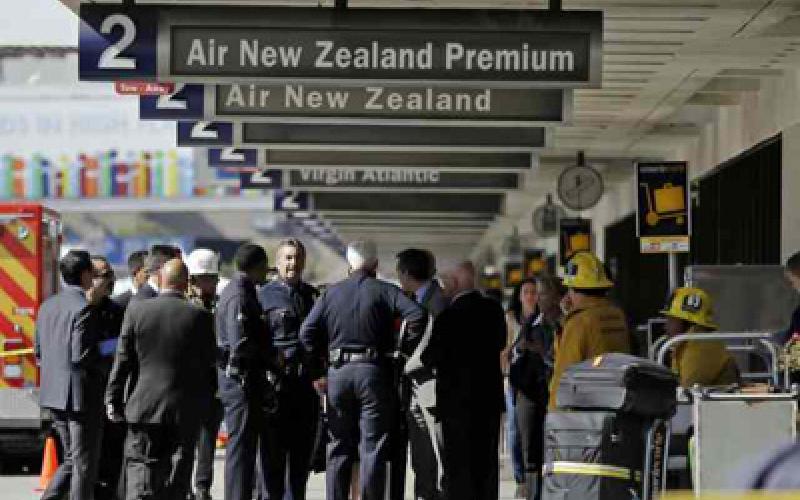 Public safety officials, including LAPD, LAFD and others converge in LAX during the aftermath of the November 1, 2013 shooting.

The following is an Op-Ed by LAPPL President Tyler Izen published in Sunday’s Los Angeles Daily News. The article, headlined “The high cost of LAPD cutbacks at LAX” notes with alarm that the LAPD deployment at LAX is at its lowest level since 2001. It calls on Mayor Garcetti to reinstate positioning LAPD officers on a voluntary, overtime basis at each TSA security checkpoint at LAX as part of corrective actions to take in response to last November’s shooting at LAX, as well as the increase in violent crime reported at the airport. For one of the world’s busiest airports, as well as an acknowledged top terrorist target, LAX clearly needs to have the needed sworn personnel to maintain security and keep public safety first.

With LAPD’s deployment at LAX at its lowest level since 2001, it came as no surprise when airport officials recently reported a 10 percent increase in overall crime in 2013, and a nearly 500 percent increase in violent crimes – from only three in 2012 to 14 in 2013. The violent crimes included 10 aggravated assaults, two robberies, a rape and the November 1 killing of a Transportation Security Administration officer, the first TSA officer killed in the line of duty.

As the many agencies involved in securing the world’s sixth busiest airport finish their after-action reports on the Nov. 1 shooting, they would do well to focus as much or more of their attention on preventing the next criminal act at LAX as they do on figuring out how to better respond when one occurs.

Increased crime rate figures at LAX released this week underscore what LAAPOA has been pointing out in the media and will be publicly focusing on this year: Airport officials need to look beyond physical airport improvements and focus on investing in airport security, not only by replacing airport officers lost to attrition, but increasing the ranks.

After the El Al ticket counter shooting on July 4, 2002, then-Mayor James Hahn moved quickly to place LAPD officers at each TSA checkpoint inside LAX’s nine passenger terminals. His smart idea was to free LAX airport police to provide high-visibility patrols of the airport from its perimeter to the terminal interiors.

With that bold step, Mayor Hahn hardened the target and made LAX a model for airport security nationwide. He and his successor, Antonio Villaraigosa, believed it was essential that an armed police officer stood between the non-sterile airport and the sterile area just beyond each TSA checkpoint. Without that officer in place at the checkpoint on November 1, 2013, Paul Anthony Ciancia was able to take control of Terminal 3 until officers on patrol shot him. A gunman in control of a passenger terminal is a scary proposition when you consider all the people in LAX’s crowded terminals, and that he has access to aircraft departing or arriving at the terminal.

According to data from the California Commission on Peace Officer Standards and Training, LAX Airport Police ranks declined from 514 on January 1, 2010, to 495 on January 1, 2014. This reduction came as Los Angeles World Airports phased out LAPD sworn officers who were protecting the TSA checkpoints. It also ended the high visibility LAPD motorcycle patrols of the Central Terminal Area. The net effect is a reduction of approximately 80 to 100 sworn officers (LAPD and LAX Airport Police) protecting LAX in the last three years. This led to the noticeable degradation of airport security – creating an environment conducive to a terrorist attack and the sudden rise in airport crime.

The specter of terrorism is still with us, but it now lurks in the back of our minds rather than in the foreground as it once did. It is impossible to know with precision what will be next in crime trends and safety risk, but terrorism will be a threat for years to come.

Since 9/11, there have been 41 domestic terrorist plots, including the arrest in 2012 of four Southern Californians heading to Afghanistan. While we cannot predict where terrorists will strike next, transportation systems top the list of potential targets.

Recognizing that the money to pay for public safety comes from taxpayers, our investment needs to be wise, effective and smart. The public deserves a reasonable return on investment. For that reason, Los Angeles must invest in technology and training – and our Department must collaborate and coordinate with surrounding jurisdictions to maximize the effect of public safety expenditures.

At LAX, corrective action must be taken without delay. Mayor Garcetti should direct his airport department to reinstate stationing a police officer at podiums at each of the score of TSA checkpoints around the airport as had been the case from 2002 to 2013. These fixed podiums must not be staffed at the expense of high-visibility vehicle checkpoints at the entrance (as recommended by RAND) to the airport and uniformed patrols throughout the airport. They are an important deterrent.

The mayor and City Council should direct the airport department to utilize off-duty Los Angeles Police Department officers to provide the armed officers needed at the TSA passenger screening checkpoints until airport police ranks can be expanded to provide the incremental personnel needed to maintain a hardened target.

We realize that augmenting the airport police with off-duty LAPD police costs money. Fortunately, the funds will come not from city taxpayer dollars, but rather from the airport’s self-generating budget. With billions of dollars being spent on construction projects at LAX, this is no time to pinch pennies on safety and security. All those construction projects, after all, will be of little value if people don’t feel safe going to the airport to catch a flight.