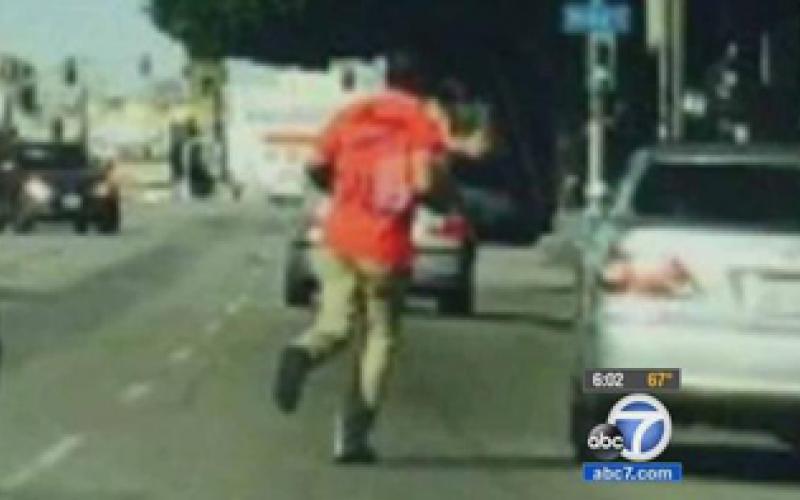 A driver involved in a hit-and-run crash in Koreatown is seen running away from the scene in this photo taken by a witness at the scene of the crash.

It is a grim fact, but Los Angeles is known as the hit-and-run capital of the nation. Recently, hit-and-runs in Koreatown and USC have severely injured innocent citizens, causing permanent damage to the victims. Rarely does a week go by that we do not see a hit-and-run occur in Los Angeles.

In the past year alone, 27 people have been killed and more than 144 have been seriously injured as result of hit-and-run crashes. While at the national level only 11 percent of drivers flee the scene of a crash, in Los Angeles, the statistic is nearly 50 percent. This should be considered an epidemic in our city that affects the entire community. Last month, the LAPD, the Department of Transportation and City officials announced a new citywide alert system for hit-and-runs. This system will greatly benefit the citizens of Los Angeles and increase public safety. By alerting citizens to suspect and vehicle information, Angelinos can protect themselves, be on the lookout for the perpetrator and know the proper channels to report any information they may have to authorities. Drivers will also be discouraged to flee the scene of an accident, knowing that if they do, their description will be broadcast throughout the city, increasing the likelihood that they will be arrested.

The alert system will harness the City’s combined resources including social media, Nixle and NotifyLA text message alert system, as well as reach private companies such as taxis, Metro and rideshare companies to communicate these messages throughout the City. Additionally, the City is setting up a reward system to incentivize witnesses to step forward with evidence to help officers identify and apprehend criminals.

Hit-and-runs are only one of the many challenges LAPD officers face every day. Challenges that require the hard work, dedication and resources of the best and most highly-trained police force in the nation. Currently, the LAPD solves only 20 percent of hit-and-run cases.

This alert system is a step in the right direction. We are encouraged by City officials and the City Council for recognizing this and providing the LAPD with this new system, which will be another tool in officers’ belts to use to fight crime and protect the citizens of Los Angeles.