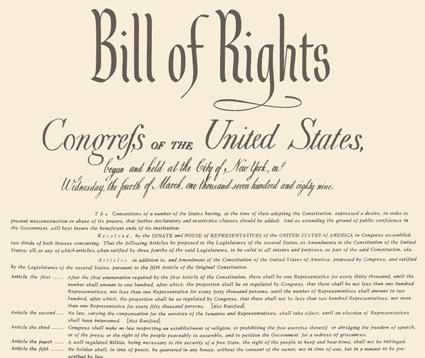 The right of the people to be secure in their persons, houses, papers, and effects, against unreasonable searches and seizures, shall not be violated, and no warrants shall issue, but upon probable cause, supported by oath or affirmation, and particularly describing the place to be searched, and the persons or things to be seized. – The Fourth Amendment to the United States Constitution

Adopted in 1792, the Fourth Amendment is the part of the Bill of Rights that prohibits unreasonable searches and seizures, and requires any warrant to be judicially sanctioned and supported by probable cause.

Seven years ago, the U.S. Supreme Court addressed what happens if police show up at a house occupied by two people, request permission to search the house and one occupant says yes and the other says no. In that ruling, the court said in the event of a tie between disagreeing occupants, the objecting occupant wins.

The case is being followed closely in Los Angeles and across the nation because it could narrow legal protections against police searches. Reporting on the court hearing, David G. Savage of the Los Angeles Times said the high court appeared to back the warrantless home search by LAPD officers.

“Justices appeared to agree with attorneys for the Los Angeles Police Department, who defended the search as legal because the gang member, Walter Fernandez, was not present and his girlfriend gave police permission to enter their home,” Savage reported.

We are encouraged by reports from Wednesday’s hearing and are grateful to the attorneys for the LAPD who defended the officers’ actions. We are hopeful the justices will agree that the Fernandez search was legal. We shall anxiously await the court’s decision as it will provide further guidance on the application of the Fourth Amendment more than 220 years after its adoption.