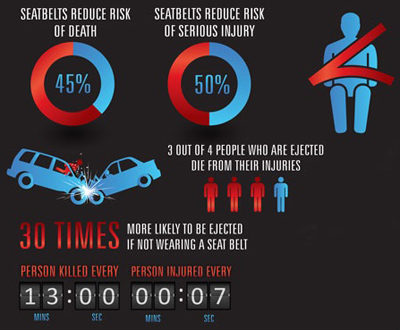 A report of the Department’s audit presented last week to the Los Angeles Police Commission is likely to rekindle the on-again/off-again debate on safety belt use by police officers and the extent to which tactical considerations should be a factor in non-use.

The report by Inspector General Alexander Bustamante said a review of the Department’s Traffic Collision Reports for the second quarter of 2012 “suggests the incidence of officer safety belt non-use could be as high as 37 percent.”

That percentage would be in line with national statistics. In the past three decades, at least 42 percent of police officers killed in vehicle crashes were not wearing safety belts or other safety restraints, according to a federal review by the National Highway Traffic Safety Administration (NHTSA). In fact, the NHTSA found that traffic-related incidents were the leading cause of law enforcement fatalities for 14 of the past 15 years.

“Aside from policy considerations,” Bustamante wrote, “the immediate concern regarding the officer non-use of safety belts is that officers are needlessly placing themselves at risk of injury. Our review identified that officers sustained injuries, sometimes serious, in almost 18 percent of the collisions when safety belts were not used. In contrast, when officers did use safety belts, they suffered injuries less than 7 percent of the time, and none of the injuries were serious.”

Bustamante recommended that the Police Commission direct the Department to review its safety belt policies to determine whether officer vehicle safety is sufficiently emphasized and whether the Department employs sufficient incentives for safety belt use, or appropriate penalties for non-use.

This important issue has been researched, studied and debated since modern safety belts became standard equipment in police cruisers and civilian automobiles more than half a century ago. Over the years, a variety of reasons have been cited in Los Angeles and across America for non-use of safety belts. While some officers are disinclined to use seat belts because they believe the restraints slow their movement in and out of their cars – potentially putting them at a tactical disadvantage – the reality is that officers can be trained to use seat belts and be tactically sound. With proper training and regular use, officers can use seat belts without having the straps get tangled with utility or gun belts and slowing their tactical response.

The State of Maryland Highway Safety Office, in collaboration with the Maryland Chiefs of Police Association, Maryland Sheriffs’ Association and International Association of Chiefs of Police, has released an outstanding 12-minute video called “Arrive Alive.” This video discusses the importance of seat belts and the hazards of excessive speed and distraction in order to assist their officers to arrive alive.

“Arrive Alive” is now available on the POST Learning Portal. It may also be downloaded from the Maryland Sheriffs’ Association website.

We welcome a comprehensive review of safety belt use, with the goal of balancing the needs for maximum safety on the roads and the ability to respond instantly in an ambush or other unexpected encounter. We urge officers to participate in this process. Please share your experiences and thoughts by leaving a comment below.