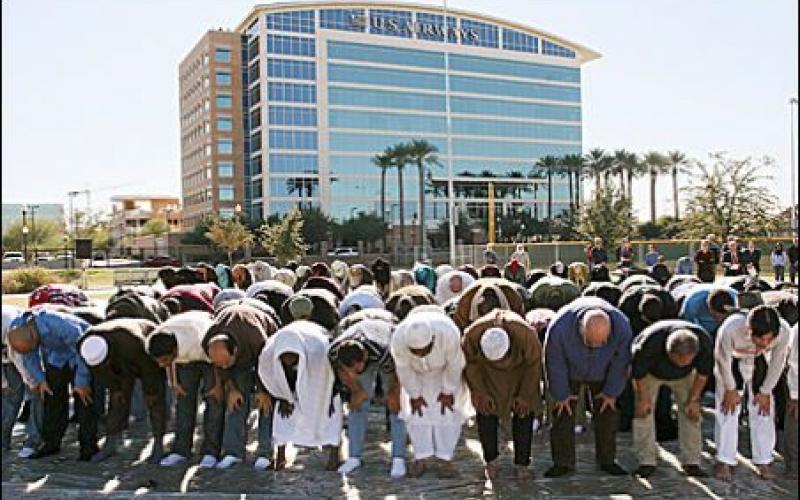 REUTERS/Jeff ToppingMuslims and members of Interfaith Groups gather for a congregational prayer service and rally in a park opposite US Airways headquarters in Tempe, Ariz., on Dec. 1, 2006, following the removal of six imams from a flight at MSP.

In 2007, Congress passed a law to retroactively give individuals more protection from being prosecuted for reporting suspicious activities that could lead to acts of terrorism. Unfortunately, the law did not give law enforcement officers as individuals the same immunity from being sued, a judge ruled on Friday.

Here’s the background: The law was passed in part to scuttle a lawsuit by six Muslim imams detained at Minneapolis-St. Paul International Airport. They had sued US Airways, an FBI agent and Metropolitan Airport Commission police for discrimination after authorities removed them from a flight in 2006. They had been praying shortly before boarding a flight to Phoenix. Once they were in their seats, a passenger sent a handwritten note to the pilot that there were "six suspicious Arabic men on plane, spaced out in their seats. All were together, saying ‘. . . Allah . . . Allah,’ cursing U.S. involvement w/ Saddam before flight – one in front exit row, another in first row 1st class, another in 8D, another in 22D, two in 25 E&F."

US Airways refused to allow them to fly. Court documents say airport police and FBI agents detained, handcuffed and pat-searched the imams, confiscated their bags, and transported them by police car in plain view of the flight's passengers. The clerics were later released when officials determined they posed no threat.

In a pretrial motion, lawyers for an FBI agent and airport police argued that the new law that gave private citizens more immunity for reporting suspicious actions at airports should also cover law enforcement officers. However, U.S. District Judge Ann Montgomery ruled that there was no indication that Congress intended to do that.

While the FBI and airport police in Minneapolis consider appealing the decision, in the interest of flight safety, Congress may want to clarify the law legislation to specifically give law enforcement officers immunity in such cases.