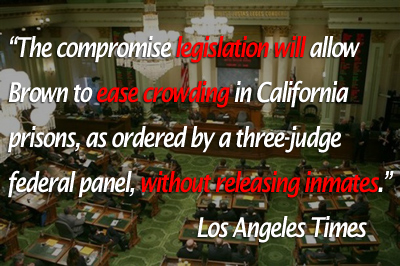 Governor Brown recently came to an agreement with legislative leaders that allows the state to comply with a federal court order to limit the prison population to 137.5 percent of capacity while avoiding the early release of thousands of prisoners.

On behalf of all Los Angeles police officers, we applaud Governor Jerry Brown, Senate President Pro Tem Darrell Steinberg, Assembly Speaker John Pérez, Senate Republican leader Bob Huff and Assembly Republican leader Connie Conway for reaching an agreement that helps keep California residents safe. These leaders recognize that we cannot release these dangerous convicted felons early. We are already seeing crime rates spike as the state continues to place prisoners into overcrowded county jails. Unless felons know that at the end of the day they will lose their freedom if they continue to commit crimes, there is no incentive for them to stop committing those crimes. We hope that the panel of three federal judges that ordered California to release felons will modify their order and support the plan adopted by the governor and legislative leaders that puts public safety first. The plan would:

We hope the three federal judges provide the state time to let the proposed compromise work rather than mandate that felons be released throughout the state. Los Angeles police officers share the goal of the governor and legislative leaders who want to provide the best prison and rehabilitation system in the country.