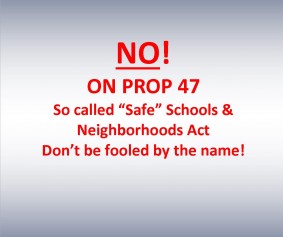 Californians are facing one of our most serious public safety threats in recent memory. The threat is Prop 47 — a ballot initiative that would flood the streets with thousands of dangerous felons and soften penalties to make misdemeanors out of serious crimes that are now felonies.

We face a huge uphill battle to defeat it. According to a recent San Francisco Chronicle column, the pro-Prop 47 forces have raised more than $3 million, compared to just $8,000 by the opposition. Recent polls show that about 6 in 10 people support it. But do they really know what Prop 47 is going to do if it passes?

That’s why it’s so important for you to get the word out about this ill-conceived and dangerous initiative. Its backers are peddling the sham that it would create safer neighborhoods and provide money for schools. They don’t want the public to know the following:

Prop 47 coddles sexual predators, increases the prospects of addicts continuing their addictions and committing crimes to feed their habits, eliminates current gun-theft deterrents and puts an enormous burden on small business by going easy on petty theft and fraud. It will burden our criminal justice system by overcrowding jails with dangerous felons who should be in a state prison, and it will jam courts with hearing requests from inmates seeking to obtain “Get out of prison free” cards.

Law enforcement professionals, prosecutors, business leaders and crime victim advocates recognize Prop 47 for what it is; a radical package of poorly thought-out policies, wrapped in a poorly drafted initiative, that will endanger all law-abiding Californians.

San Mateo County District Attorney Steve Wagstaffe put it succinctly when he recently told the San Jose Mercury-News, “Someone can commit petty theft 10,000 times and we’d still have to always charge it as a misdemeanor.”

Clearly, we’re not going to win the Prop 47 fundraising battle. But we must win the ballot box battle, and it’s critical for this state that we do. So, please talk to your friends, neighbors, relatives — everyone you can think of — and encourage them to vote NO on Prop 47 in November. Call and email your elected officials and encourage them to speak out against this dangerous and irresponsible initiative.

When a career criminal steals a firearm, or a suspected sexual predator possesses date-rape drugs, or a carjacker steals yet another vehicle, there needs to be an option besides a misdemeanor slap on the wrist. Proposition 47 DOES NOT put public safety first.