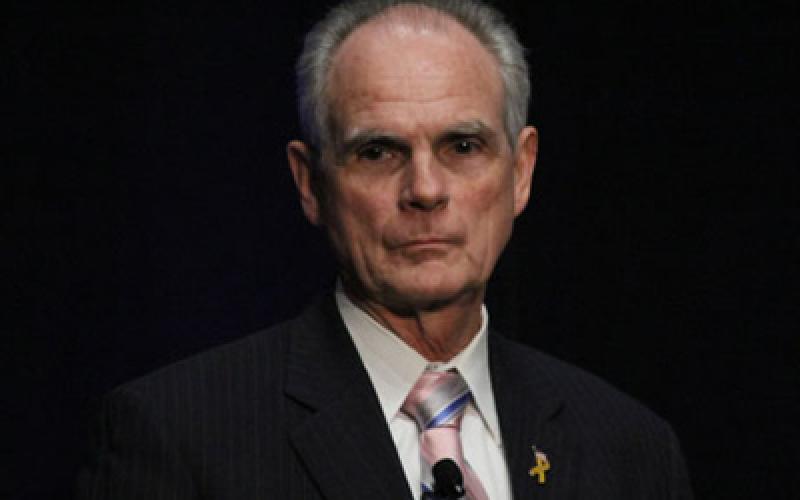 San Jose Mayor Chuck Reed and mayors from four other California cities announced a pension reform initiative on Tuesday that would amend the California Constitution. They are attempting to add the initiative to the November 2014 state ballot.

A new pension initiative funded by out-of-state interests has been filed to amend the California Constitution to let the City reduce the pension benefits of police officers and other government employees. Texas billionaire John Arnold, who made millions working for Enron during the Enron-initiated California energy crisis, provided the majority of the funding for this initiative.

The initiative would allow all public employers to unilaterally reduce its employees’ pension formula going forward, increase the age at which employees would be able to retire to collect a retirement under the new formula, and increase the amount of money employees have to pay into the pension system each week. The initiative establishes that all of the changes would be set at whatever level the employer wants.

The initiative sets no floor on benefit changes, so Los Angeles police officers and other city employees would be at the City’s mercy as to how low the takeaways will go. 1.5 percent at age 60 for current police officers; no COLAs for future years of service; no more retiree health care to be earned for future years of service – and any, all or more (less!) could be implemented at the City’s discretion or even decreased in future years if the City wanted to go that route. If the City decided it would no longer pay into the pension system, you would have to pay all of the yearly pension costs that could be imposed.

Dave Low, chairman of Californians for Retirement Security, which represents active and retired public employees, said the measure “breaks the promise of a secure retirement made to millions of Californians, many of whom are ineligible for Social Security and have an average pension of $26,000 per year. It will allow public employers to unilaterally cut the retirement benefits promised to current teachers, firefighters, police officers and school bus drivers.”

The initiative will also require employers to develop a “funding plan” for those pension plans, which are funded at less than 80 percent. The guise of having to meet this funding plan will, of course, provide cover for employers to affect your current pay. Raises, overtime, and future benefit increases in areas such as medical plans would no longer be on the table in order to keep up with the rising costs of the new funding plan.

Changes that lower pension benefits have been applied to new workers because they know up front the bargain they have entered. Abolishing collective bargaining and instead imposing reductions to pension and retiree health benefits – after an employee has committed a substantial part of their productive working life to an employer – is contrary to fairness and the rule of law. That those proposing this change to affect one group of employees have stooped to the drastic step of amending the state constitution, which by its terms currently forbids such a practice, is an admission of the radicalness of such a change to an established rule.

This initiative is the first shot against removing the ability of public employees to collectively bargain for benefits and employment conditions. The stated reason, that such changes are needed for the fiscal health of the employer, can easily be used in the future to remove collective bargaining rights for fair pay, working conditions, or any area where the employer is restricted in imposing employment conditions. However, it doesn’t end with police officers and other public employees. If the contractual rights of one group can no longer be protected, what contractual rights will out-of-state billionaires next decide should no longer be protected by the California Constitution?