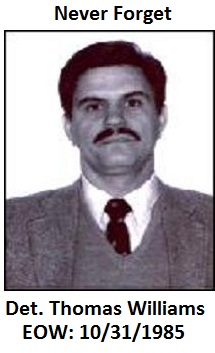 The Los Angeles Police Protective League vehemently opposes the release of Voltaire Williams, who was involved in the brutal ambush assassination of LAPD Detective Thomas Williams. The murder occurred on Halloween in 1985 in a spray of gunfire just as Det. Williams was picking up his young son from his son’s daycare center.

Now, Det. Williams’ two adult children and widow, along with the Los Angeles Police Protective League, are emphatically protesting the release of Voltaire Williams. We urge you to keep this brutal killer behind bars for the public good.

Voltaire Williams is scheduled to have a parole hearing on February 5, 2014*, at Solano State Prison, where he should remain for the rest of his life.

Please take the time to send a letter to the Parole Board expressing your opposition to his possible parole. You can read the letter the Police Protective League sent HERE . Please mail all letters to:

UPDATE 12-4: The Officer Down Memorial Page website ODMP.ORG has a preformatted letter that you can edit and print specifically for this parole hearing. It can be found HERE.

UPDATE 12-6: The parole hearing date has been updated to Feb. 5 from the previously published date of March 9.