Last week we ran into criticism for posting about the Wisconsin fight over collective bargaining rights and urging members to support unionized workers there. The inclusion of links to the websites of organizations who are at the forefront of this fight, but with whom many League members disagree, overshadowed the valid call, we feel, for the support of union rights. 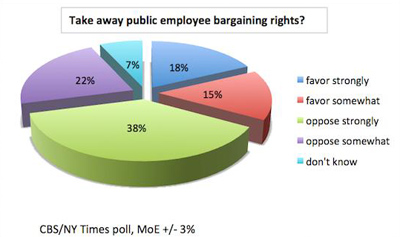 Two interesting lines of criticism developed in the posting’s comments section. The first was from members who objected to the attention on the affairs of other states, and the other was from members who felt that we needn’t worry about attempted curbing of collective bargaining rights because public safety officials were being exempted in Wisconsin and this kind of law would never happen in Democrat-controlled, pro-labor California.

But now in Ohio, the collective bargaining rights of police officers and firefighters are indeed on the chopping block. The state senate there passed a bill that proposes to strip away these rights from the state’s public employees, including police officers and firefighters. The bill is widely expected to pass and get the Ohio governor’s approval. This legislation shows that unionized public safety workers are, in at least some parts of the country, no longer immune from the anti-union mood.

And if some of us are resting assured that people will always distinguish between the perceived greed behind the collective bargaining of other public workers, and the deserving status of our own public safety special class, the Ohio bill and its fast track to passage is an indication that many elected officials and voters don’t share our sentiment.

We support unionized workers’ right to protect their own deals. Whether other public workers are overpaid, or whether they deserve pensions, it’s up to them to negotiate with their employers, and vice versa. They should have the right to collectively bargain for compensation, benefits and working conditions that are suitable and appropriate for them and affordable to their employer.

When the time came to negotiate the current contract between the City and rank-and-file officers, Los Angeles city leaders proposed a 14% salary cut. Without collective bargaining, the cut could’ve simply been handed down to officers. But through negotiation, other ways for the City to save $100 million were found and a flat 14% salary cut was averted. Also averted was the proposed decrease to the City’s subsidy for healthcare benefits, which prevented officers from having to pay more out of their own pockets.

Collective bargaining helps ensure that you are still treated and compensated fairly. It ensures you have a say in the sacrifices and cuts you will shoulder. We aren’t asking you to protect the contracts or deals or wages of other workers; that’s the job of their respective unions. But as direct beneficiaries of the collective bargaining process, we should oppose a misguided attack on the process because there’s no guarantee that it won’t spread to our state, in one form or another.