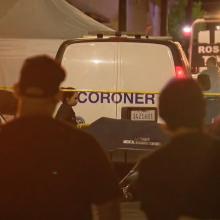 1 Killed, 2 Injured In Wilmington Shooting; Police Searching For Suspects
One woman was killed and two others were injured Tuesday afternoon after a shooting in the Wilmington neighborhood of Los Angeles, and police are searching for suspects. Calls came in for a shooting in the 800 block of North Lagoon Avenue shortly after 2 p.m. Tuesday, about a mile from Los Angeles Harbor College, the LAPD said. When officers arrived on the scene they discovered three people who'd suffered gunshot wounds — a 20-year-old woman, a 20-year-old man and a 45-year-old woman. All three people were transferred to the hospital according to the Los Angeles Fire Department. The 20-year-old woman died from her injuries, but the other two are said to be in stable condition. Witnesses told FOX 11's Ed Laskos that two men drove up to the home, got out of the car and started shooting. A relative said that the 20-year-old woman killed was not the intended target, but her boyfriend standing next to her was. He was not hit.
FOX 11

1 Dead, 1 Wounded In Overnight Northridge Shooting
Los Angeles police were investigating after one man was killed and another man was wounded in an overnight shooting in Northridge. Around 11:55 p.m. Sunday, the Los Angeles Police Department received multiple calls about a shooting that occurred in the alleyway between Roscoe Boulevard and Schoenborn Street. The victims reportedly arrived in the alley where another group was gathered. A short time later, the two groups got into an altercation that ended when one man pulled out a gun and shot the two victims. Arriving officers found two men down at the scene where one of the victims was declared dead and the other victim was rushed to the hospital by ambulance. FOX 11’s Gigi Graciette reported around 20 people were gathered at the scene when the coroner arrived. In addition, his girlfriend reportedly witnessed his killing. As of Monday morning, no one has been taken into custody in relation to the deadly shooting. Homicide detectives continue to interview witnesses.
FOX 11

Body Found Near Busy Mid-City Intersection
A person was found dead in a Mid-City street Monday night. Though no age, gender or identity has been released, the body was found at about 10:15 p.m. at Venice Boulevard and South La Brea Avenue, according to Officer Lee of the Los Angeles Police Department. It is unknown if a vehicle was involved in the death, Lee added.
KTLA 5

‘Looks Like Sweet Justice Served’: Hollywood Restaurant Owner Tackles, Detains Robber Who Punched Patron
The owner of a Hollywood restaurant is being hailed as a hero after security footage captured him chasing down a robber and restraining him until help arrives. Video of the incident shared to Reddit’s r/AbruptChaos, YouTube and by Street People of Los Angeles on Instagram, shows the attacker, a man who appears to be in his 20s, sucker punch a diner at Raffallo’s Pizza near the intersection of Hollywood Boulevard and La Brea Avenue, then steal from the victim’s pockets. As the robber begins to walk away, Tim Ratcliff, who owns the neighboring business Hollywood Shin, immediately begins pursuing him, and the chase doesn’t last long. After taking a punch, Ratcliff tackles the robber and the victim’s belongings go flying into the street. “He ruined my glasses. They’re destroyed,” Ratcliff said while narrating the security footage. As Ratcliff uses some “judo moves” to pin the thief, two women help gather the victim’s belongings and those belonging to Ratcliff, whose cash spilled out while restraining the man.
KTLA 5

Would-Be Burglars Scared Off By Security Alarm At West Hollywood Home
A homeowner in West Hollywood avoided a break-in last month after a pair of would-be burglars were foiled by the home’s security camera and alarm. Video from the almost-break-in was shared with KTLA by Amazon, which owns Ring, the home security system company. The video shows a pair of men wearing dark clothing and backpacks as they approached a locked security door at the end of an entryway. One of the men turns to face the sidewalk, apparently acting as lookout, while the other man fetches a long string from his bag. The man then begins sliding the string between a crack of the security door and slowly lowering more slack, in what appears to be an attempt to open the door from the other side. The homeowner was alerted to motion at their door and checked in on the camera, only to find the incident unfolding live. But before the two men are able to see if their plan would work, the homeowner’s alarm sounded and the two men quickly gathered their belongings and calmly walked away from the scene.
KTLA 5

Beverly Hills Surgeon Pleads Guilty In Insurance Fraud Scheme Involving Addicts
A Beverly Hills surgeon and his girlfriend have pleaded guilty in an insurance fraud scheme that involved recruiting patients at Southern California sober-living homes to undergo unnecessary surgeries and other procedures. Randy Rosen ran Wellness Wave, a surgical center in Beverly Hills, and his girlfriend, Liza Vismanos, owned Lotus Laboratories, a toxicology lab in Los Alamitos. Prosecutors said they billed health insurance companies some $676 million for medical procedures and tests and collected millions in reimbursements, according to court documents obtained by the Orange County Register. Rosen pleaded guilty last week to several counts of submitting fraudulent insurance claims with an aggravated white-collar-crime enhancement, while scores of other charges were dismissed, the Register reported Monday. He faces 10 years behind bars, but will get credit for two years he has already served.
LA Times

Hawthorne Man Accused Of Sexually Abusing Girls His Wife Baby Sat
Authorities were seeking additional victims of a 74-year-old man who was accused of sexually abusing two girls that his wife baby sat in Hawthorne. Rosendo Medrano was arrested Wednesday on at least five felony counts stemming from the abuse, which allegedly occurred between 2012 and 2016 while Medrano was living in Hawthorne with his wife, who was baby sitting the two girls, according to the Los Angeles County Sheriff's Department. Medrano was booked into the LASD South Los Angeles Station jail and was being held on $2.5 million bail. He is scheduled to appear in court on Thursday. "Based on the nature of the allegations and ... Medrano's access to children, detectives believe there may be additional unidentified victims,'' the LASD said. Anyone with information or who may have been a victim was asked to contact the LASD Special Victims Bureau at 877-710-5273. Anonymous tips can be called in to Crime Stoppers at 800-222-8477 or submitted online at lacrimestoppers.org.
NBC 4

Man Fatally Shot In Compton
Authorities were investigating the shooting death of a man in Compton Sunday. The victim was found at approximately 11:38 a.m. Sunday in the 700 block of North Kalsman Avenue, according to the Los Angeles County Sheriff’s Department. He was pronounced dead at the scene. Sheriff’s homicide detectives responded to the scene to investigate. No further information was immediately available.
MyNewsLA.com

Yorba Linda Woman Arrested For Road Rage Incident That Led To Driver's Amputation
A Yorba Linda woman was arrested this week for allegedly ramming several cars off the road in a road rage incident that led to the amputation of one of the other drivers' limbs. Kaylynn Heatley, 21, was arrested Monday on suspicion of assault with a deadly weapon, hit and run, and reckless driving causing great bodily injury with a felony enhancement for permanent disfigurement, according to the California Highway Patrol. Officers say that on Aug. 12, Keatley was behind the wheel of a Jeep Wrangler, driving along State Route 91 in Corona, when she intentionally rammed into a Tesla, causing two cars to drive off the road. Keatley, officers say, fled the scene. One of the drivers hurt in the crash was hurt so badly that doctors had to amputate one of their limbs. The victims were all transported to the hospital with "major" injuries according to CHP. Investigators eventually obtained the license plate of the Jeep believed responsible for the crash, and that night, CHP located Heatley's Wrangler at an address in Placentia and took it into evidence.
FOX 11

Miami-Dade Officer Critical After Shooting; Suspect Dead
A Miami-Dade police officer was critically wounded and an armed robbery suspect was killed in an exchange of gunfire during a car chase Monday night, authorities said. The suspect smashed his vehicle into a police cruiser and another car while trying to flee following a reported armed robbery near the Liberty City neighborhood, the Miami-Dade Police Department said in a statement. "An altercation ensued and shots were fired resulting in both the officer and subject shot," the statement said. The suspect died at the scene. The officer was hospitalized in critical condition at the Ryder Trauma Center, where many fellow officers gathered in a show of support. “I ask our community to please stand as one and pray. We have hard days ahead of us. We have to do this together as one, as a community, as a law enforcement family,” Miami Dade Police Chief Alfredo Ramirez said outside the hospital. “Right now all I ask for is prayers and good thoughts, and unity.” Three people from the car that was struck were hospitalized in stable condition, the police statement said.
Associated Press

Louisiana Officer Run Over, Dragged 100 Feet During Attempted Traffic Stop
A police officer in Louisiana is in critical condition after police say a suspect ran over him with a vehicle and dragged him during an attempted traffic stop. Police in Lafayette, Louisiana say the officer was dragged 100 feet early Sunday morning. Lafayette is about 50 miles west of Baton Rouge. Officers had tried to stop a car that was driving recklessly downtown around 1:30 a.m., Lafayette police spokeswoman Sgt. Robin Green said in a news release. Green said the driver sped away but ran into a roadblock. He then reversed and struck the officer. An officer shot at the car but no one was struck. Green said the officer who was run over had “severe” injuries, though he was stable. The driver was arrested on suspicion of attempted first-degree murder, reckless operation of a vehicle, resisting an officer with force and operating while intoxicated.
Associated Press

Human Remains Found In Burn Area Of Chatsworth Brush Fire
Skeletal human remains were found Tuesday in an area of Chatsworth that was burned by a brush fire, the Los Angeles Fire Department said. The fire, which was first reported around 1:30 p.m. in the 11100 block of North De Soto Avenue, temporarily closed all lanes of Highway 118 in the area. The blaze was contained at just under two acres by 3:45 p.m. As crews were working in the area, they found bones that appeared to be human remains, the department said. The remains were unrelated to the fire. The LAFD arson section is working with Los Angeles police and the L.A. County corner’s office to investigate the remains and determine the cause of death.
LA Times

Public Help Sought To Identify Patient At LAC+USC Medical Center
Authorities Monday sought the public’s help to identify a patient at LAC+USC Medical Center who was brought to the facility by ambulance from downtown Los Angeles. The woman was found Wednesday in the area of Seventh Street and Standford Avenue, and has been hospitalized with no ability to identify herself since, said Cesar Robles, a social worker at the hospital. The woman is about 30 to 35-years-old, 5 feet 6 inches tall and weighs 138 pounds, with “medium light-colored skin,” brown hair and brown eyes. She has a tattoo on her left arm reading “Baby G.” Anyone with information on the woman’s identity was asked to contact Robles at 323-409-6884.
MyNewsLA.com