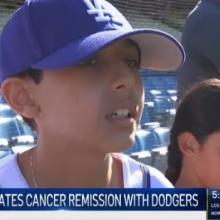 An 11-year-old boy diagnosed with a brain tumor will make the "It's time for Dodger baseball" announcement before Wednesday night's game at Dodger Stadium. Jonathan Gonzalez reports for the NBC4 News at 5 p.m. on Wednesday, Aug. 21, 2019.
City News Service
NBC Los Angeles

An 11-year-old boy diagnosed with a brain tumor will make the "It's time for Dodger baseball" announcement before Wednesday night's interleague game against the Toronto Blue Jays at Dodger Stadium.

A.J. De La Torre, the son of Los Angeles Police Department Officer Richard De La Torre, was diagnosed with a medulloblastoma brain tumor about the size of a tennis ball on the base of his brain on Nov. 30, 2017.

A.J. underwent surgery in December 2017 to remove 95% of the tumor, but 5% had infiltrated into his brain stem where it was not safe to remove, according to the Los Angeles Police Protective League, the union representing the department's rank-and-file officers.

A.J. underwent multiple rounds of radiation and chemotherapy. He is coming to Dodger Stadium to celebrate receiving the news that his brain cancer is in remission, a team official said.

Donations to the GoFundMe account established to assist the De La Torre family with medical expenses and home care can be made at www.gofundme.com/FightOnAj.