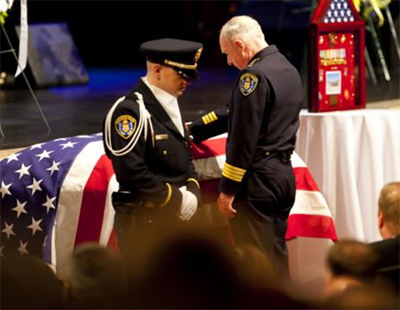 Police Chief William Lansdowne at the casket of Officer Jeremy Henwood, who was shot in an unprovoked attack during a routine police patrol in San Diego. (Nelvin C. Cepeda, AP)

WASHINGTON - Nearly 40% of police officers fatally shot this year have been slain in ambush-style attacks or when they were surprised by suspects with firearms, according to a USA TODAY review of officer deaths.

The killings, many stunning for their brutality, have some law enforcement and Justice Department officials scrambling to provide additional protection or training for their forces.

Of the 50 officers killed by gunfire this year - a 32% increase from the same time last year - at least 19 were victims of ambush or surprise attacks, according to a review of the case summaries and interviews with police officials.

The increase in gun-related officer deaths is particularly troubling since violent crime in much of the nation has been in steady decline. "This is a devastating and unacceptable trend," Attorney General Eric Holder told law enforcement officials this month in Washington. "Too many guns have fallen into the hands of those who are not legally permitted to possess them."

Holder has launched a broad review of officer-safety in the wake of rising gunfire fatalities, citing the need for more research to help officers survive violent encounters, including ambush-style attacks.

In several cases, the victims suffered fatal head wounds, which Robert Kaminski, a University of South Carolina criminologist who studies attacks on police officers, and other analysts said suggests that the attackers deliberately aimed to avoid protective body armor that leaves the neck and head exposed.

"There is an increasing trend in the number of fatalities involving ambush," Kaminski said. "I think it is a big concern."

Kaminski said ambush killings of police have been generally rising since 1994 when 10% of officer slayings were the result of ambush attacks. Although the numbers have fluctuated over the years, ambush killings increased to 31% of firearm-related officer deaths in 2009, according to the most recent statistics gathered by the FBI.

Police officials and analysts said motivations for the killings stem from a wide range of social problems, from mental illness to increased desperation caused by domestic or economic pressures. Bernard Melekian, director of the Justice Department's Community Oriented Policing Services (COPS) office, said the "collision of stressors" often places officers "in the wrong place at the wrong time."

Among the recent attacks:

Sheriff Ray Foster said he was walking "shoulder-to-shoulder" with Justus when he was hit between the eyes by sniper fire. "We never saw him," Foster said of the shooter, whose position was found more than 50 yards away. Foster said the suspect was armed with a high-powered rifle mounted on a tripod to steady his aim. Stiltner was killed when one of the rifle rounds penetrated his protective vest.

This month, Foster took a major step toward changing the outcome in future confrontations with armed suspects when he placed an order for 20 assault rifles and two sniper rifles for his 33-deputy force. The sheriff also is applying for a $300,000 grant to purchase an armored vehicle. "I'm just trying to level the playing field," he said.