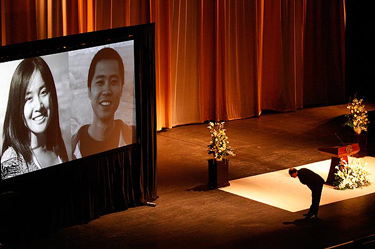 Los Angeles police Friday afternoon arrested the man suspected of fatally shooting two USC students from China in a botched robbery and a second man believed to have some involvement in the killings, several LAPD sources said.

The man suspected of being the killer in the case that has garnered international attention and turned a harsh spotlight on the elite campus set among some of the city's roughest neighborhoods was taken into custody about 4 p.m.

Dozens of detectives, plainclothes officers and members of the Los Angeles Police Department's SWAT unit descended on the 1200 block of 91st Street in South Los Angeles, residents said. They arrived suddenly but discreetly, disrupting a kids' game of kickball in the street and an ice-cream truck that was trolling down the block, said a woman who declined to give her name.

"It was quiet, calm. We thought at first they were a crew filming 'Southland,' " the woman said, referring to the television drama about L.A. cops. She said she watched the operation unfold from her lawn.

SWAT officers entered the bright blue, two-story house, said the woman. They emerged soon after with a man in handcuffs and handed him off to other officers who led him to an awaiting car, the woman said.

The woman, who said she has lived on the block for years, said she had never before seen the man, who had a medium build and appeared to be in his early 20s. Also taken into custody at the house was a 19-year-old woman who lives in one of the nearby apartments, the neighbor said.

Police sources declined to identify the man, saying only that he is thought to be the one who shot the USC graduate students during a robbery. They did not give details on how investigators identified him, but one described the case against the suspect as "very, very strong."

A police source who requested anonymity because the investigation is ongoing said ballistic tests on shell casings recovered at the scene of the USC shooting show they were fired from the same gun used in two other shootings. 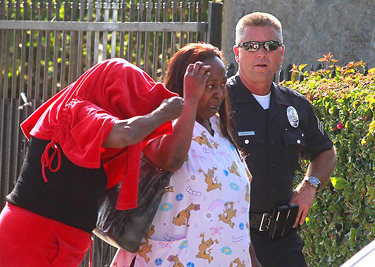 Two people talk with a Los Angeles police officer outside an apartment building in the 1200 block of West 91st Street near where a suspect was arrested in the shooting deaths of two USC students from China. (Brian van der Brug / Los Angeles Times)

Detectives working on the two previous shootings had followed some "very tenuous" leads that led them to believe the man taken into custody might have been involved, the source said. The source added that the man did not have an extensive criminal record.

The source said police knew the man had been in possession of something that "could very readily be tied to one of the victims."

Electronic engineering students Ming Qu and Ying Wu were sitting in a 2003 BMW about 1 a.m. April 11 when a gunman approached and shot two or three times into the driver's side. The two had been chatting, with the car double parked.

Property belonging to the two students was missing, leading investigators to suspect that robbery may have been the motive for the crime. Three neighbors heard the gunshots and called 911. Shortly after the shooting, a witness saw a person in dark clothing running from the scene, according to Deputy Chief Pat Gannon.

Gannon said a dark-colored car, possibly an American model, pulled away right after the shots were fired. After reviewing surveillance footage from the video cameras in the area, the LAPD has identified 75 vehicles that fit the description of the dark car, and Gannon said detectives were tracking down the ownership of each of the vehicles.

The students had been studying before the attack. Qu had driven Wu to the house where she was renting a room. He parked in front of the home, while Wu went inside briefly to change her clothes. She went back outside, and the two continued talking in the car.

After the shooting, Qu attempted to run for help but collapsed on a nearby porch with a gunshot wound to the head, Gannon said. Wu was found slumped over inside the vehicle.

The students' parents filed a wrongful death lawsuit against the university this week, saying the school misled them when it claimed that it ranks among the safest in the nation.

USC officials said they would seek to have the case dismissed. The university's attorney, Debra Wong Yang, said the university security net can stretch only so far and that the killings occurred three-quarters of a mile from campus in the third tier of security.