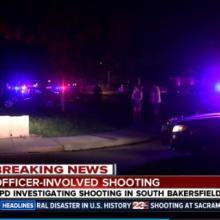 BPD said the two officers are in stable condition and the suspect has died. (Screen grab image from news video.)
2 Bakersfield officers shot and suspect killed after report of a man with a gun

Two Bakersfield police officers were shot and a suspect was killed late Wednesday when the officers responded to a report of a man with gun, authorities said.

Authorities received the call about 9:18 p.m. from a home in the 600 block of Pacheco Road, according to Sgt. Ryan Kroeker, spokesman for the Bakersfield Police Department. “Sounds of a disturbance” could be heard in the background, he said in a statement.

About 14 minutes later, the officers arrived and reported that they had contacted the suspect, the sergeant said.

“A short time later, officers reported that an officer-involved shooting had occurred, and the suspect and officers had been struck by gunfire,” Kroeker said.

The suspect, whose identity was not immediately known, was pronounced dead. The officers were taken to a hospital and are expected to survive, he said.

During the investigation, Kroeker said, police recovered a firearm.

After the officers are released from the hospital, he said, they will be placed on routine administrative leave.

The shooting in Bakersfield comes hours after a sheriff’s deputy was killed and two California Highway Patrol officers were shot during a gun battle at a hotel in Sacramento.

In that incident, authorities were following up on a stolen vehicle investigation and went to a Ramada Inn in Sacramento, where they encountered a suspect.

Sheriff’s spokesman Sgt. Tony Turnbull said the man fired through the hotel room door and walls, striking the two CHP officers. The suspect, armed with a high-powered rifle, then went to the balcony, he said, and exchanged gunfire with deputies standing outside the hotel.

During the gun battle, authorities said, the deputy was shot in his side and the bullet entered his chest cavity. The deputy, later identified as Robert “Bob” French, died on the way to the hospital.

The suspect eventually climbed off the balcony, hopped into a vehicle and led police on a pursuit, Turnbull said.

After driving through several neighborhoods, he crashed the vehicle near Watt Avenue and another exchange of gunfire with deputies ensued, the sergeant said.

The man was shot, taken into custody and later hospitalized.

The CHP officers, whose identities have not been released, were also hospitalized and were expected to recover.