Skip to main content
28
Feb 2017
20 years after the North Hollywood shootout, echoes of the terror remain 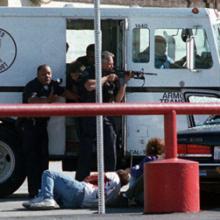 LAPD Officer James Zboravan was two months and eight days out of the police academy when he faced a barrage of machine-gun fire, shot and wounded a bank robber and dove across unarmored officers to shield them with his bulletproof vest.

He was shot four times before leaping through an exploding glass doorway.

"There was no time to be scared. It's not a macho thing. There's so much going on. You fall back on your training - the best in the world," recalled Zboravan, an award-winning sergeant now serving as an assistant watch commander at Northeast Division. "The lesson is, very plainly: "Just because you're shot doesn't mean you're going to die. You must fight on."

Twenty years ago today, on Feb. 28, 1997, two men armed with fully automatic weapons and clad in heavy body armor did more than rob the Bank of America at 6600 Laurel Canyon Blvd. in North Hollywood.

For 44 thunderous minutes, they marched through a neighborhood under siege, spraying stores, homes and cars with 1,100 armor-piercing bullets, wounding 11 police officers and six bystanders.

More than 300 outgunned law enforcement officers from five agencies, fighting for their lives, fired back with more than 550 rounds. But most were from .38 revolvers or 9 mm pistols pitted against an arsenal of high-capacity AK-47s and automatic rifles.

• PHOTOS: North Hollywood shootout 20th anniversary - a look at the past and present

The nation then watched the terror unfold on live TV as news helicopters broadcast the battle now known as the North Hollywood shootout.

When the shell casings stopped rolling, two bandits lay dead - one after shooting himself after sustaining 10 gunshot wounds - and the other after bleeding to death from 29 gunshots after telling police, "F--- you. Shoot me in the head."

Like the scars still left by the hail of bullets across North Hollywood, the gunbattle would transform the Los Angeles Police Department, boosting its reputation after the Rodney King Jr. debacle, while altering its response to what became known from then on as "an active shooting situation."

• GREG WILCOX: The home improvement store that served as our makeshift office during the North Hollywood shootout is still there, and so is the man who runs it

Los Angeles, once known as the bank-robbery capital of the world with up to 900 heists in 1992, according to the FBI, had 11 such heists last year after police tactics developed after the infamous shootout were implemented.

The shootout also left indelible marks on scores of cops and civilians, with many suffering depression, nightmares and flashbacks more typical of battle-scarred soldiers. For their heroism, 19 officers would receive medals of valor.Advertisement

One seriously wounded officer who later quit the force to become a minister said: "I heard the devil; he told me: 'You're gonna die, you're gonna die.' "

And in a case of life imitating Hollywood, 14 months after the bank-robbing movie "Heat," the shootout laid siege to North Hollywood. The real-life gunbattle then inspired made-for-TV documentaries and movies.

"It was really a seminal moment in law enforcement," said Burbank Police Chief Scott LaChasse, who served as LAPD commander during the shootout and who now lectures around the world on how it changed police tactics, weaponry, communications and mutual aid. "After North Hollywood, this was the most significant event that involved the most change to not only the LAPD, but police departments throughout the world."

As a result, police departments in Los Angeles County and beyond now have access to more powerful weapons, including assault rifles and shotguns with plug rounds.

Armed to the teeth

The gunmen in "Heat" had nothing on these two.

Larry Eugene Phillips Jr., 26, was a gruff-looking man with a pencil mustache, a former grifter once arrested for real-estate fraud. He had a wife and two children.

Emil Dechebal Matasareanu, 30, was a scraggly haired, 283-pound native of Romania who suffered painful seizures after being struck in the head by a mental patient at his mother's home-operated day-care center.

He had brain surgery months before his death and was estranged from a wife and two kids.

A civil-rights lawsuit later filed on behalf of Matasareanu's two young children alleged he was deliberately allowed to bleed to death. It ended in a deadlocked jury, with the city ultimately agreeing to pay $50,000 in legal fees.

The former Altadena residents had once served a brief stint in jail for possessing what Glendale police said was virtually a bank-robbery kit.

The two men were later tied to two San Fernando Valley bank heists netting $1.67 million, as well as an armored truck robbery in which a guard was killed. The cash was never found.

For Matasareanu and Phillips, suspected of pulling off a number of sophisticated bank heists, the North Hollywood robbery was to be their biggest yet.

The bank was expected to have more than $750,000 to accommodate a Friday payday.

The pair, drawn together by a love of weight-lifting and weapons, had planned for months, assembling the body armor and reinforcing it over vital organs.

They gathered their automatic arsenal, including a Chinese-made AK-47 for Phillips, with a 70-round drum magazine, and a Bushmaster XM15 assault rifle for Matasareanu, with twin drums containing 100 rounds. Of their nearly 4,000 rounds of ammo, many were armor-piercing.

"How many officers down?"

On the morning of the robbery, officials believe they took phenobarbital to help control their nerves.

At 9:17 a.m., they pulled up to the North Hollywood bank and synchronized their watches to account for an anticipated 8-minute LAPD response time once they entered. But as the pair lumbered from their Chevrolet Celebrity sedan, they were spotted by LAPD Officers Loren Farrell and Martin Perello, who were on patrol and called in for backup for a possible robbery.

Inside the Bank of America, the two gunmen shot out the tellers' windows and forced their way into the vault.

Apparently enraged to find only $350,000 in its coffers, they beat a bank branch officer.

But in the time it took them to place the money on a cart and leave the building, the LAPD had surrounded the bank, and the SWAT team was on its way. Some SWAT members had been working out at the LAPD academy and arrived in gym shorts and bulletproof vests.

Both men left the bank and took aim at the surrounding officers.

The robbers, clad in cut-up Kevlar, emptied their clips, sending hot rounds through concrete walls, iron fences, dozens of cars and through the walls of a nearby ice cream parlor and pizza joint.

A golden retriever was shot in the nose while on the way to his vet.

"Does any unit know how many officers are down?" asked a police radio dispatcher.

During the standoff, frustrated police ran into the now-defunct B&B Gun Shop to grab high-powered weapons and ammo. But most police officers remained calm, despite ineffective weapons, faulty radios and a command post relocated four times.

South of the bank, Carlos Lemus, an employee of the Goodyear tire shop, was walking toward its ATM when he realized he'd forgotten his billfold.

"Forgetting my wallet was the luckiest thing I ever did," said Lemus, 59, who still works at Mountain View Tire. "It wasn't my time."

At another nearby shop, Miguel Lopez was installing a battery in the car of an off-duty police officer when the shooting started. "It sounded like a war, like death," said Lopez, 58, who is now retired. "He said, 'Oh man, it's my lucky day.' "

North of the bank across Archwood Street, bullets drilled through the stucco of Baskin-Robbins, piercing ice cream counters above the pistachio almond bucket, as well as an ice cream cake in a now patched-up freezer. "I think it's like a movie," said store manager Eim Tang.

The bullets then whizzed through Mr. Jiffy's Pizza, narrowly missing a driver before bouncing off a warming oven. Its owner, Fred Abdo, was headed to work when he saw the bandits, in dark clothing and ski masks.

"I saw their faces. They looked like zombies, no emotion. Like drugged. Scary," said Abdo, an Armenian immigrant from Iran. "We ran away from Iraqi bombs and came here."

Outside, LAPD Officer Bill Lantz was five days out of the police academy when he and his training officer cowered behind their cruiser in the intersection.

"It was like the movie 'Heat,' bullets spraying everywhere," recalled Lantz, now a corporal, while revisiting the scene. "Our car started taking rounds. Plink plink. The windows shattered. The light bar was shattered."

But while beating a retreat, he took a bullet in the knee and collapsed in the strip mall driveway. His partner, Officer Dean Schram, saved his life by drawing returning fire.

"LAPD shined that day," said Lantz, who has had three knee surgeries. "The citizens need to know we're only human. We put on these badges to help them. We put our lives on the line. But we all have families to go home to."

Across Laurel Canyon Boulevard, Jose Haro had hit the floor in his locksmith kiosk, where Zboravan and three other police officers took cover. The kiosk would take 150 rounds, some of which are visible today.

The Argentine immigrant then sprinted to a nearby cleaners, where he pulled a woman to safety just as bullets shattered a window. For his valor, he would receive an award from the county.

"After everything was over, I saw the bullet holes in my kiosk, and my arms started to swell," Haro, now retired and in ill health, told the Daily News a decade ago. "For eight months, I didn't sleep during the night."

It was from the kiosk, once positioned directly across from the north bank door, where Zboravan had nicked Phillips with his shotgun. And it was at the key shack that he dove atop Detective William Krulac and Officer Tracey Angeles as Phillips returned fire.

He and Krulac were then hit by bullets. Wounded and bleeding, they sprinted toward the doorway of an upstairs dentist office, between a defunct Builders Emporium and Hughes Market, in what is now a Smart & Final and a Ralphs.

Dr. Jorge O. Montes, who would receive an award, risked his life to treat the wounded cops. For his trouble, he later suffered nightmares and a nervous tic in one eye. His father, worried during the ordeal, suffered a heart attack and died later from the anxiety, he said.

He recalled the detective saying of the AK-47 nightmare, "I served in Vietnam. And I'll never forget that sound. We have pea shooters compared to what these guys have."

Phillips walked down Archwood Street, continuing his gunbattle with police. When his gun jammed and he was no longer able to advance, he shot himself.

Matasareanu tried to hijack a pickup, but he was unable to get it started and then began a 6-minute gunbattle with police, until he collapsed from his injuries. He bled to death while police, concerned about reports of a third masked gunman, searched the area.

As the gunfire suddenly ceased in front of her Archwood home, Anna Kazanchyan crouched inside with her two young children watching it play out on TV.

"I can't forget that day," said Kazanchyan, now 49. "It sounded like they were shooting at the house. We only knew what happened when we saw it on the news."

Twenty years later, the North Hollywood shootout is still vivid for those who suffered through it, and it has become part of the cultural lore of Los Angeles.

At the Los Angeles Police Museum in Highland Park, the robbers' stickup duds and guns are on display in what has proved to be its most popular exhibit. Out back, their bullet-ridden getaway car, a destroyed LAPD black-and-white, and an armored car that helped rescue cops and civilians gathers crowds.