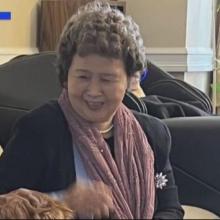 83-Year-Old Woman Killed In Koreatown Hit-and-Run
The family of Bong Lee is pleading for help finding the driver who killed their 83-year-old loved one in Koreatown. "She just made me laugh so much," said granddaughter Mary Lee. "It makes me sad I didn't have more moments with her." The hit-and-run crash happened on Third Street near Western Avenue at about 6 a.m. on Monday morning. Lee was crossing the road when a BMW heading eastbound crashed into her and drove away. "From what I predict she was going to morning prayer at church," daughter Alena Lee said in Korean. After the crash, Lee was rushed to the hospital but the injuries to her brain and body were too severe. "A lot of fractures in her body," Alena said in Korean. "Basically, the pelvic bone, the right side of her face and her right rib cage was shattered." But what angers this family the most, is that driver didn't stop and help.
CBS 2

Boy Reported Missing Near Windsor Square
A 13-year-old boy was reported missing in the Windsor Square area of Los Angeles and authorities Thursday issued an endangered missing advisory for him. Joseph Ki Lee was last seen at 7:30 a.m. Wednesday at the intersection of South Kingsley Drive and West Third Street between Harvard Boulevard and Ardmore Avenue, said the California Highway Patrol, which issued the alert on behalf of the Los Angeles Police Department. Joseph is Asian, 5 feet, 6 inches tall, weighs 170 pounds, has black hair and brown eyes. He is believed to be on foot and was last seen wearing a navy blue hooded sweatshirt, khaki pants and blue shoes. Anyone who has seen Joseph or knows of his whereabouts was asked to call 911.
MyNewsLA

Actress Denise Richards Shot At During Road Rage Incident
Actress Denise Richards and her husband Aaron Phypers were shot at during a road rage incident Monday afternoon, her publicist confirmed to NBC News. The couple were on their way to Popsicle Studio LA in the Chesterfield Square area of South Los Angeles when the driver in a vehicle behind them began getting frustrated and shouted at them. Phypers was in the driver seat when shots were fired, publicist Jill Fritzo confirmed to NBC News. The driver of the other vehicle reportedly began shooting at them as he tried to squeeze in front of them. No injuries were reported and it is unclear if police responded to the incident. NBC4 reached out to Richards' team who declined to comment, beyond confirming the details of the shooting.
NBC 4

Man Shot And Killed In Huntington Park, Shooter At Large
A man was shot and killed in Huntington Park and an investigation of the shooting is underway, authorities said Thursday. Deputies were called at 5:38 p.m. Wednesday to the 2600 block of Saturn Avenue, east of Pacific Boulevard where they found the victim unresponsive, according to the Sheriff's Information Bureau. The victim was taken to a hospital, where he was pronounced deceased. There is no additional information. Anyone with information on the shooting was asked to call the Sheriff's Homicide Bureau at 323-890-5500. Anonymous tips can be called in to Crime Stoppers at 800-222-8477.
CBS 2

Family Searching For Agua Dulce Single Mother Who Went Missing Last Month: 'Please Come Home'
A distraught family is desperately searching for an Agua Dulce mother who suddenly vanished without explanation. Family members say Jazmin Escobedo has been missing since Oct. 23. They say a friend dropped Jazmin off at a laundromat in the East L.A. area around 7:30 p.m. to wash clothes before she headed off to work as a waitress at a catering event. That's the last time anyone saw her. "The fear of not knowing where she is and that she could be in danger... is what makes us break down," said her sister, Sylvia Escobedo. Her sister says Jazmin is a single mother of a 7-year-old daughter. Before she disappeared without a trace, she was getting her life together and had checked into a recovery program for alcoholics. Detectives are involved in the case, but not have not released any information about the search or any possible leads.
ABC 7

Man Who Led Authorities On Wild Chase From O.C. To L.A. County Charged With 18 Felonies
The man who led authorities on a wild and destructive chase across Orange and Los Angeles counties last week was on parole for attempted carjacking and evading police, and will face 25 criminal charges in connection with the pursuit, according to authorities. Johnny Anchondo, 33, of Moreno Valley is accused of leading multiple law enforcement agencies on a high-speed pursuit that wound from Fullerton, through Orange County and into eastern L.A. County before ending with a crash and shooting by L.A. County sheriff’s deputies at a Hacienda Heights gas station. Along the way, Anchondo allegedly stole two vehicles — carjacking one of them after entering a home in Whittier — and crashed into multiple motorists’ and law enforcement officers’ vehicles. He has been charged with 18 felony and seven misdemeanor counts, the Orange County district attorney’s office said Wednesday. The chase began around 6:46 p.m. Nov. 9 when Fullerton police tried to pull over a driver for “vehicle violations,” prosecutors said.
LA Times

Beverly Hills Burglar Sought By Police
Police are searching for a burglary suspect roaming around the Beverly Hills area. The man typically frequents the area near Camden Drive and Olympic Boulevard, according to Beverly Hills police. He allegedly burglarized a residence in Beverly Hills. Police say the suspect is also a transient. He is described as a Black male who weighs 160-175 pounds. He was last seen wearing a black jacket, white lifeguard t-shirt, white Adidas shoes, and carrying a black backpack. No further details were available. Anyone with information is asked to call the Beverly Hills Police Department at 310-285-2125. Anonymous reports can be submitted by texting “TIP BHPDALERT” followed by the tip information to 888777.
KTLA 5

Silver Alert Issued For Man Last Seen In Santa Monica
Authorities issued a Silver Alert Wednesday for a 74-year-old man who was reported missing in Santa Monica. Freddie Phillips was last seen at approximately 4 p.m. Tuesday at Fourth Street and Idaho Avenue, according to the California Highway Patrol, which issued the Silver Alert on behalf of the Santa Monica Police Department. Phillips is Black, 6 feet tall, weighs 166 pounds, is bald and has brown eyes. Authorities said he was last seen wearing a red sweater and red pants and is believed to be on foot. Anyone who sees Phillips or knows of his whereabouts was asked to call 911. The Silver Alert program was established by the CHP to issue and coordinate alerts involving the unexplained or suspicious disappearance of elderly, developmentally disabled or cognitively impaired individuals.
MyNewsLA

Fighting Fentanyl In California: Prosecuting Murder
The war against fentanyl rages on as the synthetic opioid continues killing children, teens and adults at alarming rates across the nation. As communities continue being ravaged by fentanyl deaths, one local prosecutor has made it his mission to deter drug dealers by handing down the harshest penalty against those tied to fentanyl fatalities — second-degree murder. KTLA’s Karen Wynter reports on the opioid crisis in Part Two of the “Fighting Fentanyl” series. Riverside County District Attorney Mike Hestrin helped form a gang impact team in 2021. The unit has arrested dozens of suspected drug dealers, with some tied to deadly overdoses. Riverside County was the first county in California to prosecute fentanyl deaths as murder. So far, they’ve prosecuted 15 cases — the most in the state. “The amount of fentanyl we are seizing from the streets is eye-popping,” says Hestrin. “It’s enough to kill everyone in the county.”
KTLA 5

Killer Who Stabbed 4 Idaho Students To Death Still At Large
The killer — or killers — who stabbed four University of Idaho students to death remained at large Tuesday, prompting many students to leave the campus in the idyllic small town despite police assurances that there was no imminent risk to the community. So many students had left the scenic tree-lined campus in Moscow, Idaho, by Tuesday that university officials said a candlelight vigil scheduled for the next day would instead be held after the Thanksgiving break. The students, all close friends, were found dead in an off-campus rental home around noon on Sunday, and officials said they likely were killed several hours earlier. Latah County Coroner Cathy Mabbutt told the Spokane, Washington-based television station KXLY that her preliminary investigation showed the students were stabbed to death. There is no indication that substance use was involved in the deaths, Mabbutt said.
LA Daily News

Kentucky Deputy Wounded In Ambush Shooting Undergoes Surgery To Amputate Leg
A Floyd County deputy underwent surgery this week to amputate his leg due to injuries he suffered after a man opened fire with a high-powered rifle while deputies attempted to serve a warrant in June. Three officers and a K-9 were killed – marking the deadliest police shooting in Kentucky history. Floyd County Deputy William Petry, Prestonsburg Police Department Captain Ralph Frasure, Prestonsburg Police Office Patrolman Jacob Chaffins and Floyd County K-9 Drago died from their injuries. Five other officers were wounded, including Floyd County deputy Darrin Lawson. Lawson’s fiancé, Madyson Nunnery, shared a post about the deputy on social media after he underwent surgery, writing: “This decision wasn’t made lightly and ultimately, this is where we are.” The post provides further information about Lawson’s condition, stating he will undergo an additional hospital stay, rehab and physical therapy, but will begin working with a prosthetic team soon, WYMT News reported.
PoliceOne

LA City Council Election: Soto-Martinez Declares Victory, O'Farrell Concedes
Labor organizer Hugo Soto-Martinez has defeated two-term Councilman Mitch O'Farrell in the race for the Los Angeles City Council's 13th District seat, with O'Farrell conceding Tuesday. Soto-Martinez led O'Farrell by nearly 5,000 votes after Tuesday's vote-counting update, holding more than 55% of the vote. He has been ahead since Election Day after also taking first place in the June primary. "We ran this campaign to build community power for workers, immigrants, the unhoused, people of color, young people, renters, and all of us who have been neglected by our city officials," Soto-Martinez said in a statement declaring victory. "Now, we're bringing this movement into City Hall." O'Farrell, in a statement Tuesday afternoon after the Los Angeles County Registrar-Recorder/County Clerk updated the count, said the results were "not what we hoped for," but he was proud of his campaign and team.
FOX 11