Skip to main content
15
May 2014
Beck mourns loss of LAPD officer; 'today the grief is different' 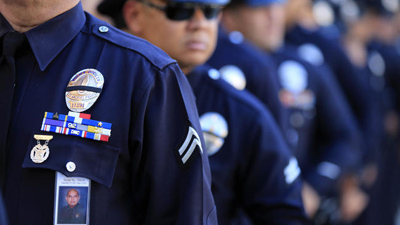 For the third time in two months, hundreds of police officers filled a downtown Los Angeles cathedral Wednesday morning to bid an emotional farewell to an LAPD officer killed in a car crash.

L.A. Mayor Eric Garcetti, Police Chief Charlie Beck and California Atty. Gen. Kamala Harris were again among those gathered at the Cathedral of Our Lady of the Angels, this time to honor Officer Roberto Sanchez, the 32-year-old officer killed May 3 when an SUV struck his patrol car in Harbor City.

Sanchez was one of four LAPD officers to die in a traffic incident since early March, his funeral coming less than a week after a veteran detective was killed off-duty in Beverly Hills.

"For the last two months, I've been asking -- as you all do -- when enough is enough?" Beck said in his eulogy.

The chief was emotional as he spoke, acknowledging that Sanchez's death was different than the others. A 20-year-old man has been charged with murder in his death, accused of intentionally ramming his car into Sanchez's cruiser to help a friend the officer was following.

"Today the grief is different. Today that grief is compounded by anger," Beck said. "Roberto didn't just die. He was murdered. And the people responsible will be brought to justice."

Sanchez's wife of nearly six years, Sonia, and his parents sat in the front row of the massive cathedral, surrounded by family and friends wearing white T-shirts with Sanchez's badge and picture, a white flower pinned to their chests. Several officers wiped tears from their eyes as the family processed in.

"Once he ... became an LAPD officer, his family was overjoyed," said Noel Perez, a family friend. "Because his dreams and aspirations came true."

The funeral will be followed by a procession to Good Shepherd Cemetery in Huntington Beach, where Sanchez will be buried.

Sanchez, 32, was killed May 3 when an SUV struck his police cruiser in Harbor City. He is one of four LAPD officers killed in a traffic-related incident since early March. A fifth officer died of a heart attack while working at LAPD's Central Division the same day Sanchez was killed.

Shortly before 3:45 a.m. that day, police said, Sanchez and his partner were following a Chevy Camaro speeding down Anaheim Street in Harbor City. The Camaro made a sharp U-turn, and the police cruiser did the same.

Several law enforcement sources told The Times that investigators determined that the Tahoe swerved across the center strip of the roadway and crashed into the police car. There were no signs the driver tried to brake, said the sources, who requested anonymity because they were not authorized to speak.

Varela pleaded not guilty to the charges last week. If convicted, prosecutors said, he faces life in state prison without parole.

His 19-year-old brother, Bryan Varela, was a passenger in the SUV at the time of the crash and also fled the scene, Beck said. Bryan was also arrested but has not been charged in connection with the case.

The LAPD is reeling from the recent string of deaths. Six days after Sanchez died, veteran Det. Ernest Allen was killed off-duty after an out-of-control concrete truck crashed into his pickup in Beverly Hills.

On March 7, LAPD Officer Nicholas Lee was killed on the same Beverly Hills road when another out-of-control truck struck his police cruiser. On April 5, longtime motorcycle Officer Chris Cortijo was struck in Sun Valley by a woman authorities allege was high on cocaine. He died four days later from his injuries.

"We are all grieving," Beck told The Times on Saturday. "But here we have no opportunity to move beyond the first stage of grieving before we suffer another loss."