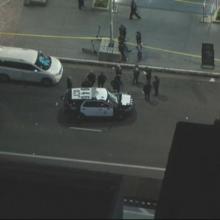 Boy, Woman Stabbed In Downtown Target Store; Suspect Shot And Killed
A 9-year-old boy and 25-year-old woman are hospitalized in critical condition Wednesday after being stabbed at a Target store in downtown Los Angeles. Los Angeles Police Department officers arrived at the store at the FIGat7th shopping center shortly after 6:20 p.m. Tuesday to find two stabbing victims and a third victim who was trampled by shoppers running out of the store, LAPD Chief Michel Moore said at a news conference. The woman was stabbed in the chest and the boy sustained a deep laceration in a shoulder, police said. The boy’s mother was in the store but was not with him at the time oft the stabbing. Moore said the suspect “told the young boy that he was going to stab him and kill him. He repeated that more than once.” Moore said the boy tried to get away from the suspect before he was attacked.
MyNewsLA

Birthday Party Murder Suspect Sought By LAPD
Police are searching for a murder suspect who shot and killed a person attending a birthday party in Los Angeles. The suspect is wanted for the shooting death of one victim and the attempted murder of two additional victims on Oct. 23, 2022. The fatal shooting happened in the 300 block of East 62nd Street, just east of the Royalty Market around 1:57 a.m., according to the Los Angeles Police Department. LAPD says the suspect shot the victims while they were standing outside of their vehicles. He then fled the scene in a black 2007 Mercedes-Benz. The vehicle was later found abandoned on the northbound 110 Freeway at Exposition Boulevard. The suspect’s image was captured by a nearby surveillance video. He is described as an 18- to 22-year-old Hispanic male. He is approximately 5 feet 6 inches to 5 feet 9 inches tall and weighs about 170 to 180 pounds.
KTLA 5

LAPD Searching For Driver In South LA Hit-and-Run That Left Toddler In Critical Condition
Los Angeles police are asking for the public's help finding a hit-and-run driver who struck a mother and toddler, leaving the child in the street with life-threatening injuries. A $25,000 reward is being offered for information leading to the arrest and conviction of the SUV driver who collided with the two on Saturday, Oct. 1, sending the 3-year-old boy flying into the air so hard he was injured again when he hit the ground. The mother, Elsa Zelaya and her son, Dominick Zelaya, were crossing on Broadway and 80th Street in South Los Angeles when they were struck. The driver fled the scene, but another motorist stopped to help the two. While Elsa only sustained minor injuries, Dominick was hurt so badly his situation was considered life-threatening and he is recovering from surgery at Children's Hospital. Police are asking the suspect to have a heart and come forward.
ABC 7

Victim Stabbed In The Face At Taco Stand In Canoga Park
Police are searching for a suspect who stabbed a person in the face while at a Canoga Park taco stand. According to the Los Angeles Police Department, the stabbing happened at 9:18 p.m. near the intersection of Sherman Way and De Soto Avenue. The suspect, who was reportedly wanted for a robbery, drove away in a pickup truck that was last seen on Sherman Way and De Soto Avenue. He is only described as an about 25-year-old Hispanic man wearing a checkered shirt and blue jeans.
CBS 2

11 L.A. County Sheriff’s Recruits In Critical Condition After Being Hit By Car During Morning Run In Whittier
A group of law enforcement recruits are in critical condition after they were hit by a car during their morning run in Whittier, authorities said. The California Highway Patrol said the incident was reported at 6:30 a.m. near the intersection of Mills Avenue and Telegraph Road. The recruits attend the Sheriff’s Training Academy and Regional Services (STARS) Center located in the 11500 block of Colima Road, which is roughly a mile and a half from the crash site. SkyFOX was over the scene and showed the debris from the wreckage as well as additional patients being triaged by medical personnel. The 11 victims have been rushed to area hospitals and up to 15 may have been hit. The circumstances leading up to the driver striking the victims are under investigation. A neighbor told FOX 11 the recruits often run in the area and run in packs wearing high-visibility vests.
FOX 11

LA Rapper Blueface Arrested In Las Vegas On Suspicion For Attempted Murder
Los Angeles rapper Blueface was arrested in Las Vegas for a shooting that happened in early October. The Las Vegas Metropolitan Police Department arrested the 25-year-old Blueface, whose real name is Jonathan Porter, outside of a business in the 300 block of Hughes Center Drive. He was booked with attempted murder with a deadly weapon and discharging a firearm at/into an occupied structure. The arrest stems from a shooting on Oct. 8 in the 6300 block of Windy Road in Las Vegas.
CBS 2

Authorities Warn Of Cryptocurrency Scams In L.A. County
The Los Angeles County Sheriff’s Department is warning residents of cryptocurrency scams. The agency indicated that victims have reported a more than $7.7 million loss due to cryptocurrency-related crimes in the region since January 2021. Authorities warn residents that if they see a text, email, tweet or other social media message telling them to pay with cryptocurrency, “that is a scam.” The fraud and cyber crimes bureau of the department shared the following tips with the public to avoid becoming a victim. Scammers use the following tactics to trick people into buying and sending cryptocurrency : An “investment manager” of a well-known company is contacting you. An online “love interest” wants to you to send money or cryptocurrency to invest. Someone posing as a celebrity encouraging you to click on a link or a QR code. A new or established business offering fraudulent crypto coins or tokens. Someone impersonating government agencies, law enforcement or utility companies. Listing fake jobs on job websites.
KTLA 5

20 People, Including Employees, Convicted In California DMV Corruption Cases
Over a dozen people in California were convicted and sentenced in connection to a series of Department of Motor Vehicle corruption cases throughout the state, including in the Los Angeles area, according to the Department of Justice. The DOJ said in a news release that the 20 defendants included DMV employees, owners of trucking schools, the affiliates who bribed them and various others who conspired to bribe employees, KTLA sister station KTXL reports. According to the DOJ, they were charged with various crimes including, “bribery of public officials, identity fraud, unauthorized access of computers, and conspiracies to commit those offenses.” The actions of the defendants reportedly helped put unqualified commercial drivers who operated large commercial vehicles on highways despite the drivers not passing their written and driving tests. Employees would accept bribes to enter fraudulent scores for those who did not pass their tests and in some cases had not even taken the test, according to the DOJ.
KTLA 5

Video: Shootout Begins After Suspect Pulls Shotgun, Opens Fire On Ohio Cops
Newly released bodycam footage shows a tense shootout between Columbus police and an armed suspect. WBNS News reported police were initially called to a neighborhood for a report of shots fired. Video shows Officer Payne Vantilburg arriving at the location and speaking with a man, who was later identified as Lamar Blue. After a short interaction, officers asked the man to remove his hand from his pocket. Seconds later, Blue pulls a shotgun from behind his body and opens fire on the officers. Vantilburg returned fire and hit the man, but Blue still managed to flee. Officers eventually found him nearby, giving him medical attention before being transported to a hospital. "I believe the quick action of the officer that fired shots saved both those officers' lives,” Police Chief Elaine Bryant said in a press conference. During the press conference, Bryant said it’s the second time officers have been fired upon in less than two weeks. No officers were injured during this incident.
PoliceOne

Tennessee Cop Shot In Foot After Suspect Grabs Gun, Discharges It In The Holster
A scuffle between a suspect and an officer led to an officer being shot in the foot Monday. According to FOX 17 News, FTO Ben Williams and Officer Madison Rolon were called to a business due of a suspicious vehicle that had been parked in the same spot for several days. The officers approached the vehicle and found 36-year-old Elverto Chavez, who had an outstanding felony probation violation warrant. When police attempted to take the man into custody, he ran, eventually tripping over a curb and falling to the ground. As officers attempted to subdue the man, he grabbed Rolon's firearm and discharged it while the weapon was still in the holster, grazing Rolon’s foot in the process. She was treated and released from a hospital. Chavez, who suffered minor injuries, is expected to be booked on the outstanding probation violation charge as well as additional charges.
PoliceOne

Worker Exposed To Carbon Dioxide Leak At LAX Has Died, Family Says
A worker who was exposed to a carbon dioxide leak on Halloween at Los Angeles International Airport has died, according to an online fundraiser set up on behalf his family. Cris Abraham, 36, was one of four contract workers who were exposed to the leak in a subterranean electrical room near the Terminal 8 baggage area. “First off, I would like to thank everyone for all the prayers, kind words and donations,” wrote the GoFundMe page’s organizer, who identified herself as Abraham’s sister-in-law. “Unfortunately, due to his injuries, Cris passed away early Friday morning.” As of Tuesday evening, the fundraiser had received about $35,000 in donations. According to the GoFundMe, Abraham had been in a medically induced coma after the incident, which was reported around 7 a.m. Oct. 31. When first responders arrived, they found a 36-year-old man who was not breathing and without a pulse, the Los Angeles Fire Department said at the time. He was given CPR and taken to a hospital, where his pulse was revived and his condition was initially updated from grave to critical.
LA Times

House Catches Fire In Lake Balboa Area
A fire damaged a residence in the Lake Balboa area Wednesday morning, but no one was hurt. Firefighters sent to the 17500 block of Lorne Street at 5:16 a.m. extinguished the flames in a one-story home, the Los Angeles Fire Department reported. The fire spread into the attic of the house, and an additional house was exposed to the fire. Winds downed some power lines, and utility crews were notified. The cause of the fire was under investigation. Firefighters searched the home and found no occupants.
LA Daily News

COVID Hospitalizations Rise In LA County Amid Fears Of Winter Surge
The number of COVID-19-positive patients in Los Angeles County hospitals continued to rise, according to the latest data, amid growing concerns about a possible winter surge in virus infections. According to state figures, there were 552 COVID-positive patients hospitalized Tuesday locally, up from 502 as of last Friday. Of those patients, 75 were being treated in intensive care, up from 51 on Friday. Health officials have said previously that roughly 40% of the patients were actually admitted for COVID-related issues, while the rest were admitted for other reasons but tested positive at the hospital. The seven-day average daily rate of people testing positive for the virus has also been slowly rising, reaching 6.5% as of Tuesday, up from 5.5% a week ago. The county reported another 1,532 infections on Tuesday, raising the cumulative total from throughout the pandemic to 3,507,936. Another 10 COVID-related deaths were also reported Tuesday, giving the county an overall death toll of 34,072.
MyNewsLA