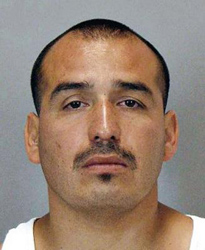 SAN JOSE, Calif. -- Police on Sunday night captured a parolee who is the prime suspect in a violent crime spree that included the kidnapping and killing of a woman and the shooting of a man at a gas station, authorities said.

After a three-day manhunt, Paul Ray Castillo, 33, was caught about 7:30 p.m. in West Sacramento by officers from the San Jose Police Department who had tracked him there, department spokesman Jose Garcia said.

Castillo was being returned to San Jose, Garcia said.

Sgt. Jason Dwyer told the San Jose Mercury News that a covert response team found Castillo in a public place and grabbed him without a struggle (bit.ly/nbeZR9).

"We have been working nonstop on this since noon on Friday," Dwyer said.

The parolee had been sought by a SWAT team and police homicide and robbery detectives in connection with the death of 60-year-old Cindy Nguyen, whose body was found Saturday in a garage in San Jose's Willow Glen neighborhood.

The rampage on Friday included the shooting of a 42-year-old man whose name and condition were not released. He was expected to survive.

Authorities believe Castillo killed Nguyen after carjacking her Lexus sedan in a shopping center parking lot Friday afternoon then driving off with her to a house a few miles away, Garcia said.

Nguyen, of Campbell, worked as an office manager and hosted a radio show on a Vietnamese station, the Mercury News reported.

Castillo was seen Friday evening in an apartment complex, leading nearly 60 officers, police dogs and helicopters to search the area and nearby neighborhood for him.

Officers shot at Castillo when they saw him come at them in a threatening manner, police said, but it was not clear whether he was hit.

After Castillo escaped the dragnet, apparently on foot, Nguyen's car was found parked at the complex.

Castillo was previously wanted for violating the terms of his parole, but Garcia did not know why Castillo had served time.