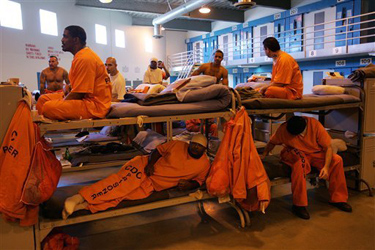 Proposition 47 by itself won't solve the problem of overcrowding in California's prisons. (AP/Spencer Weiner, Pool)

Californians voted to send fewer criminals to prison on Tuesday, approving a ballot measure that classified check forgery, possession of some drugs, and theft of property worth less than $950, among other crimes, as misdemeanors rather than felonies. Thad Kousser, a political scientist at the University of California, San Diego, told The Washington Post last week that the measure "would officially end California's tough-on-crime era." California's criminal justice system has long been among the most punitive, and the Supreme Court has ordered the state to deal with its inhumanely crowded prisons.

But the reforms might prove tougher to implement than many expect.

Proposition 47, as the measure was called, would reduce the annual number of felony convictions in California by about 20 percent, and several thousand current prisoners will be able to petition the courts for shorter terms, according to the Los Angeles Times.

Yet the current population in the state's prisons is more than 135,000 and growing, and about 89 percent of those prisoners have committed a violent or serious offense, according to the Urban Institute's Brian Elderbroom and Ryan King. To really get at the problem of overcrowding, they write, Californians will have to think carefully about the prison terms it assigns to these inmates. Proposition 47 specifically excludes criminals who have committed violent crimes.

The vote on Tuesday is one indicator that the national mood around crime is changing, but reducing penalties violent criminals will be a greater challenge politically. Some conservatives -- most notably, Newt Gingrich -- supported Proposition 47, but others with more traditional views had concerns.

Yes, most arguments against the measure were problematic. For example, residential burglary remains a felony, so prosecutors' objections about the hundreds of firearms stolen from the homes of law-abiding citizens every year just seem like a way of not talking about gun control. On the other hand, one basically reasonable counterpoint is that the threat of a felony conviction and a prison sentence is necessary to force addicts into treatment, which is ultimately better for them and their families and neighbors.