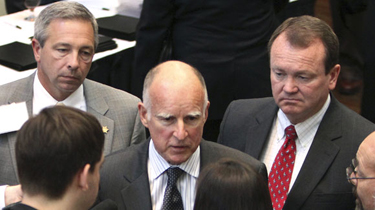 Local officials across California are bracing to manage more parolees and nonviolent felons as a new law goes into effect Saturday requiring them to take on what had long been a state responsibility.

The change is a result of budget pressures and a U.S. Supreme Court decision that required the state to lower its prison population by 30,000 inmates due to overcrowding.

Under the new law, prisoners who commit nonviolent and non-sex-related crimes, such as low-level drug offenders or thieves, will be kept in county jails instead of going to state facilities. And, when released, those prisoners will be left for county probation officials to monitor.

Los Angeles County supervisors have bemoaned the change, saying it could lead to a surge in crime and lawsuits. Money for the added work will be provided by the state but only for nine months, although Gov. Jerry Brown and others are calling for a guaranteed source of funding in the future.

"It is actually a reckless and pathetic shirking of the state's responsibility to its citizens," Supervisor Michael D. Antonovich said in a statement.

Los Angeles County Dist. Atty. Steve Cooley has also criticized the plan because he believes it will increase crime and lead judges to impose shorter sentences for criminals because they know the county already has overcrowded jails.

The county will not experience a large increase in prisoners or parolees at first. There will be about 600 new inmates at the end of October, according to estimates from state officials. County probation officials say they could have up to 120 new parolees to oversee by Monday in addition to their 50,000 other clients.

But those numbers should increase steadily. Four years from now, county sheriffs could have to find space for more than 8,300 new inmates each year, according to state officials, although some of those could be sent to drug rehabilitation centers or put under house arrest.

The county's Probation Department could eventually have up to 9,000 additional cases and may hire up to 50 more employees to deal with the new parolees, according to Reaver Bingham, a deputy probation chief.

Some officials say the parolees may have a better chance to be rehabilitated under county care because they will be from this area and have access to drug treatment and programs offered by faith-based and community groups.

"If we do the work and involve the community, I firmly believe that we can make a significant difference," said Ralph Miller, president of the Los Angeles County Deputy Probation Officers Union.

Brown has defended the move, saying at a Thursday news conference that it was "the most viable way to comply" with the Supreme Court's order.

Local police officials at the press conference also endorsed the proposal, albeit somewhat tentatively. They stressed the crucial need to guarantee the state would permanently pay counties and municipalities the added costs to house prisoners that used to be sent to state prisons.

But Pazin, president of the California State Sheriffs' Assn., supported the plan.

"There's some naysayers out there. I say to them this is a golden opportunity to fix what's been broken for decades," he said of a state corrections system that has seen as high as 70% of paroled inmates commit more crimes and return to prison.

At the Thursday press conference, Brown did not promise the transition would be seamless.

"There'll be bumps along the road," he predicted.