Skip to main content
05
Jul 2011
Can Computers Predict Crimes of the Future? 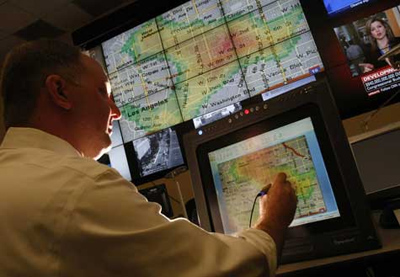 LAPD Lt. Sean Malinowski works in the crime center in front of a video wall. He's a former Fulbright scholar who is an expert in predictive policing.

It's great when cops catch criminals after they've done their dirty work. But what if police could stop a crime before it was even committed? Though that may sound like a fantasy straight from a Philip K. Dick novel, it's a goal police departments from Los Angeles to Memphis are actively pursuing with help from the Department of Justice and a handful of cutting-edge academics.

It's called "predictive policing." The idea: Although no one can foresee individual crimes, it is possible to forecast patterns of where and when homes are likely to be burgled or cars stolen by analyzing truckloads of past crime reports and other data with sophisticated computer algorithms.

"We know where crime has occurred in the last month, but that doesn't mean it'll be there next month," Los Angeles Police Department Lt. Sean Malinowski says. "The only way for us to continue to have crime reduction is to start anticipating where crime is going to occur."

Malinowski speaks with some authority on the subject. He helped coin the term "predictive policing" in an influential paper he co-authored three years ago with then-Los Angeles Police Chief William Bratton. Malinowski looks like a prototypical cop: an athletically built 46-year-old with hair receding from a sun-reddened brow, an American flag pinned just below the gold-and-silver badge on his spotless LAPD uniform. But his résumé is not exactly typical for a law enforcement officer.

"I'm not a gunfighter, that's for sure," concedes Malinowski, sitting in his office at the northwest Los Angeles police station where he's now based. Malinowski started his professional life in marketing, shilling for products like Shedd's Spread Country Crock. Unsatisfied, he went back to school to get a master's degree in criminal justice and then a doctorate in public administration. Along the way, he picked up a Fulbright scholarship to study counterterrorism at the Egyptian national police academy. He taught criminal justice at the University of Illinois for several years, but, he says, "it always bugged me that I'd never been sworn." He wound up marrying a cop, joining the Los Angeles Police Department and eventually working as Bratton's executive officer.

Bratton is a near-legend in American law enforcement circles as the police chief on whose watch crime plummeted first in New York, then in L.A. He was always getting invited to give talks on the future of policing, and part of Malinowski's job was to brainstorm with him about what to say. One of Bratton's key innovations was a computerized system called CompStat, which collects detailed reports on crimes and maps where they were committed. Versions of the system are now used by police across America. Thinking about ways to build on and improve CompStat's data-driven approach, they came up with the idea (and catchy title) of predictive policing and wrote about the concept for the Oxford Journal of Policing.

With Bratton's towering reputation behind it, the idea caught fire. Soon after the article's publication, the National Institute of Justice organized a conference on predictive policing, and the Department of Justice handed out more than $1 million in seed grants to half a dozen police departments interested in pursuing the idea. Los Angeles, where Bratton's successor Charlie Beck continues to push predictive policing, was one.

Most of the work around predictive policing is still in the research phase, but there have been some small real-world experiments. Cops in Minneapolis are trying to use predictive analytics to forecast the next likely armed robbery in a series of fast-food restaurant holdups. The Arlington (Texas) Police Department has created maps overlaying residential burglaries with building code violations and found that as physical decay goes up, so do burglaries. They're using those findings to deploy police more efficiently.

In some ways, the notion of predicting where crimes will happen based on where they've happened in the past is fairly obvious. If there have been a lot of muggings on one particular street for the last 50 weeks, there will probably be some next week. Cops know that, of course. But the idea is to make those assumptions and guesses more accurate and to turn up patterns that aren't so readily apparent.

Corporations have long used such predictive analytics to anticipate consumer demand and have found that cross-pollinating data can yield unexpected results. A famous example comes from Wal-Mart's analysis of what its customers in coastal areas stock up on before hurricanes. The list includes duct tape and bottled water, of course, but also a surprise item: strawberry Pop-Tarts.

Analyzing crime data can similarly yield counterintuitive conclusions, researchers have found. Most people think good lighting makes an area safer, for instance, but studies have found that it actually increases the chances of being victimized, says P. Jeffrey Brantingham, a UCLA anthropology professor. It seems that muggers want to be able to see their potential targets clearly.

The graying, goateed Brantingham is part of a group of UCLA researchers working with the LAPD on predictive policing. "If you accept the premise that human behavior is predictable, then you can develop mathematical and computer-based models to make predictions about what people are likely to do over time and space," he says.

Most crimes, like burglaries and car thefts, are not planned in advance but are opportunistic, Brantingham says: A bad guy sees an unlocked window and ducks in. (The research group focuses a lot on burglaries partly because there are so many of them, providing a rich data set to work from.) Offenders tend to commit such crimes in the neighborhoods where they live or work.

People's movements and interactions, Brantingham says, are not so different from those of molecules in chemical reactions; the well-understood math of chemistry can be adapted to predict how people move around a given area and thus their likelihood of coming into contact with a potential target. The models being developed now can also show which crime hot spots will be shut down by increased policing and which will just move somewhere else.

That information can give police an edge in figuring out where to deploy extra cars and cops to catch bad guys, or, better yet, keep them from opening that unlocked window in the first place. The process is not meant to finger specific individuals. "We focus on the likelihood of a crime being committed, not on who would commit it," says Martin Short, a young mathematics professor who works with Brantingham.

So far, UCLA's predictive policing models incorporate only data about types of crimes and the time and place they were committed. Malinowski aims to eventually add information about patterns of truancy, land use, vacant housing and more. Police will never be able to predict all crime, of course, but Brantingham believes they can make a significant dent. "We think you can predict and deter about 15 percent of burglaries," he says. And consider another class of crime: Each gang homicide costs the city around $1 million in police and court costs. Preventing even a few would mean major savings in dollars, not to mention lives.

The idea of predictive policing has its critics, of course. Hard-headed street cops are understandably skeptical. And civil libertarians are concerned that it could result in extra police pressure on poor and minority neighborhoods.

"Allocating law enforcement resources to areas predicted to have increasing crime and disorder is filled with ethical trapdoors," writes Lincoln, Neb., Police Chief Tom Casady in a recent issue of the journal Geography & Public Safety. "Intensive policing of the activities of young men in poor neighborhoods is a recipe for deteriorating relations between police and the community, ... accusations of racial profiling, and a threat to police legitimacy."

Malinowski says he plans to involve civil rights activists as his program gets closer to street ready. Right now, he's hoping his initial $200,000 grant will be boosted soon by another $3 million from the Department of Justice. He aims to use the funding to set up a real-world experiment, focusing on one violent offense and one property crime in two areas - a control zone that would be patrolled normally and another in which predictive policing would be applied.

"If the finding is that predictive policing makes no difference, that's fine," he says. "It'll save us from going down a wrong path." But if the results are good, it could mean a whole new future for law enforcement.