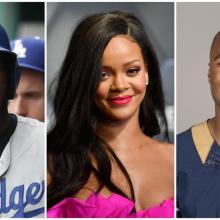 The burglary crew scoured celebrities’ social media posts and noted when they’d be away from home.

In the last 13 months, they targeted the likes of the Dodgers’ Yasiel Puig, singer Rihanna, “This Is Us” producer Daniel Fogelman and the Rams’ Robert Woods.

Authorities say they had plans to hit the homes of Laker LeBron James and actor Matt Damon, but Los Angeles police apprehended some of them before they could. Now, 13 men with alleged ties to a South L.A. gang have been charged with a series of sophisticated burglaries targeting some of the city’s biggest celebrities and athletes.

The men are charged with felony burglaries, home invasion robberies and gang conspiracy in connection with the crimes — the last of which occurred even after police announced some arrests. Ten of the accused are already behind bars, held on multimillion-dollar bail. ​​​​Prosecutors say they may be responsible for numerous other burglaries and home invasions targeting wealthy Southern Californians.

“We aren't talking just celebrities — athletes, singers, performers. We believe they are responsible for many more crimes in other places — Pasadena, Santa Monica and the sheriff’s jurisdiction,” said L.A. County Deputy Dist. Atty. Richard Ceballos. “They targeted people they thought had money.”

A felony complaint alleges that the men committed the crimes as members of the 62 Brim gang. Prosecutors say the crew also broke into the homes of rapper Curtis Young and music producer Chief Keef.

In Chief Keef’s case, they attempted a home invasion robbery Sept. 23 at his San Fernando Valley house, according to the LAPD. Some of the suspects were carrying handguns. A brick was thrown through a window and a shot was fired during the crime.

According to court and booking records, the other members of the burglary crew are: Elan Lamberto Gabourel, 25; Hassan Deontre Murphy, 19; Joseph Holley, 22; Lance Williams, 18; Devin Garner, 24; Ron Simmons, 20; and Donnie Faizon, 21. The suspects were charged Nov. 7. Three other men charged in connection with the crime spree remain at large.

One of the crew members broke into the home of Dr. Dre’s son, according to the complaint. Before celebrities, the crew targeted several other wealthy people, including CEOs with mansions featured in publications. They used real estate apps and other information about the homes to case each target, Ceballos said.

Ceballos said those charged have lengthy criminal records and are documented gang members.

The 13 suspects each face 33 felony counts related to a burglary and home invasion spree beginning in October 2017. But Ceballos said the crimes may stretch back further. One of the suspects last year was detained by gang detail officers while in possession of welding equipment, he said. In a break-in of Puig’s home, the suspects were attempting to drag a safe from the residence before they fled, Ceballos said.

The LAPD focused on the burglary crew after a break-in at the San Fernando Valley home of Woods during a Rams game on Sept. 27. The initial arrests — which included Hall’s mother, Ashle Jennifer Hall, 34 — led to a larger ring. Some of the men had been arrested for allegedly loitering in Beverly Hills near a mansion last year.

LAPD Capt. Lillian Carranza said last month after the initial arrests that it appeared the crew had bigger plans.

A list of a dozen future targets, including James, Damon and actress Viola Davis, was found inside the home of one of the suspects, Carranza said. Detectives also linked the men to other burglaries beyond those of Puig, Rihanna and singer Christina Milian.

Carranza said the burglars referred to their target selection as “flocking.”

“They flock like birds to areas where the rich and famous resided,” she said. “Once a potential target home was selected, a larger vehicle would be utilized to give the suspects the opportunity to change into more comfortable clothing and hoodies to avoid being recognized and cart away the stolen goods.”

Williams has been charged with four burglaries, including at Puig’s residence on Sept. 18; a home owned by Rihanna on Sept. 25; and a residence owned by Woods on Sept. 27. Williams listed his job as a landscaper when he was booked, records show.

LAPD detectives said all of the suspects are associated with a South Los Angeles gang. A search of one man’s home uncovered $50,000 in cash plus a pile of Rolexes, purses and jewels.

After an October news conference in which many of the items seized were displayed, Woods called the LAPD to say he recognized his watches.

Carranza said a search of an SUV with the men inside led to property stolen from Woods’ home and a firearm.

The burglaries began more than a year ago and included two heists at Puig’s home on Aug. 30 and Sept. 18, two break-ins at the home of singer Matthieu Tota on Aug. 24 and Aug. 28, a burglary at Rihanna’s home on Sept. 25 and a break-in at Woods’ home Sept. 27.

Woods was playing against the Minnesota Vikings when police received a call about a break-in at his home. Police found the rear sliding glass door smashed and his residence ransacked. A review of security surveillance video showed three hooded suspects with their faces covered going through the home.

After police arrested a suspect in that case, a search of his vehicle yielded several items alleged to have been taken from the homes of Puig, Rihanna and Milian, according to a source who was not authorized to discuss the investigation.

An image captured by a security camera during a break-in at Puig’s home matched Williams, the source said.

Puig has been the victim of several burglaries, including two attacks in recent months at his home in Encino. Like Woods’ break-in, the latest burglary unfolded during game time. A security system, however, alerted Puig’s entourage to the burglary, and police were called.

LAPD investigators suspect Williams deliberately targeted athletes during times when they would be away from their homes.

Burglars first hit a home Puig owns in Sherman Oaks in March 2017 and made off with at least $170,000 worth of jewelry. He was one of several celebrities whose homes were seemingly targeted by burglary crews seeking high-end jewelry and items sometimes kept in safes.

About an hour after the Dodgers lost Game 7 of the 2017 World Series, officers responded to another burglar alarm at Puig’s Encino home. Officers found a smashed window and items missing.

A third burglary occurred at Puig’s residence this fall, shortly after the end of a Dodgers game. Security cameras linked to a cellphone captured two people trying to break in. Puig, or a member of his entourage, was able to use a speaker on the home’s security system to yell at the men, who ran away.

The San Fernando Valley has experienced a spate of celebrity burglaries this year, including break-ins at the home of rapper Wiz Khalifa. A former home of singer Post Malone also was hit.

In 2017, burglars broke into the homes of a dozen other celebrities across the Valley and the Westside. Those break-ins included the Brentwood mansion of singer Alanis Morissette, where thieves made off with a safe containing $2 million in jewelry and other valuables. In another incident, nearly $500,000 in valuables was stolen from the home of NBA guard Nick Young.