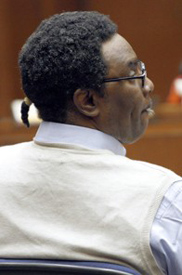 (Nick Ut, File/Associated Press) - FILE - This Oct. 24, 2011 file photo shows convicted murderer Michael Hughes, during opening statements of his murder trial in Los Angeles. Hughes, a convicted serial killer was found guilty of three more murders Thursday Nov.3, 2011 for strangling two prostitutes and a 15-year-old girl during the "Southside Slayer" attacks that terrorized the city in the 1980s and 1990s.

A man convicted of four "Southside Slayer" serial killings was found guilty Thursday of strangling three more victims in a series of attacks stretching over a decade.

Michael Hughes, 55, was convicted of three counts of first-degree murder with special circumstances for strangling two prostitutes and a 15-year-old girl during the wave of killings that terrorized the city in the 1980s and 1990s.

Prosecutors will seek the death penalty when the sentencing phase of his trial begins Monday.

The former security guard was serving a life sentence for killing four women in 1992 and 1993 when he was charged with the additional killings of 15-year-old Yvonne Coleman and two women.

Coleman had skipped school a day before her nude body was found near a park barbecue pit in January 1986. Prosecutors said she had left her boyfriend's house to catch a bus home.

Jurors found that Hughes killed her and that the crime was committed during a rape and sodomy.

Hughes also was convicted of killing prostitutes Verna Williams in 1986 and Deborah Jackson in 1993. In all three cases, jurors convicted Hughes of murder with special circumstances that he had a prior conviction for first-degree murder and convictions for multiple murders.

During the trial, Deputy District Attorney Beth Silverman showed jurors a slideshow to illustrate how the victims' bodies were posed in sexual ways to shock anyone who found them.

Defense attorney Norman Kallen noted there were no eyewitnesses to the killings and that Hughes never confessed.

Hughes was investigated by a task force looking into the killings of as many as 90 women in inner-city South Los Angeles. Investigators concluded that at least three serial killers were stalking women during a crack cocaine epidemic that forced some women onto the streets as prostitutes in order to support their habits.

Pizza deliveryman Chester Turner was convicted in 2007 and sentenced to death for killing 10 women and a fetus in Los Angeles in the 1980s and '90s. He has been charged with four additional killings and was in court this week for a preliminary hearing.

In addition, investigators arrested Lonnie Franklin Jr., a South Los Angeles mechanic, last year. He has pleaded not guilty to 10 counts of murder and one of attempted murder.

Prosecutors suspect Franklin shot or strangled 10 women and girls between 1985 and 2007, dumping their bodies in alleys near his home. The victims ranged in age from 14 to 36.

The 1980s killings alleged in Franklin's case were initially part of the Police Department's Southside Slayer task force investigation but were later separated because of ballistic differences, said Detective Dennis P. Kilcoyne of the Robbery-Homicide Division.