Skip to main content
10
Feb 2012
Driver in fatal hit-and-run did not have valid license, police say 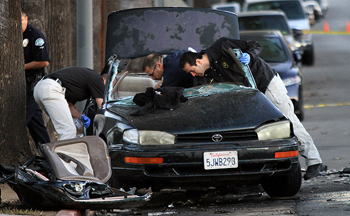 The driver who killed a woman Friday morning after speeding through a Boyle Heights intersection did not have a valid driver's license and had a warrant out for his arrest, officials said.

"We know he had a warrant, though it's not clear for what," said Officer Melissa Lisenby of the Los Angeles Police Department.

Other law enforcement officials familiar with the investigation said the driver, whose identity has not been released, had two previous citations that turned into warrants. Sources say there was no record that his vehicle had been impounded as a result of the previous citations.

The fiery crash happened about 3:10 a.m. at 4th Street and Boyle Avenue.

Two men in the speeding vehicle were arrested and a third was still at large, Herrera said. It was unclear whether the driver was one of the two arrested.

No information was available on the victim.