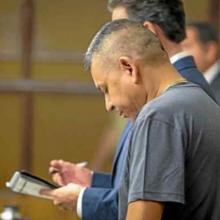 The driver of a dump truck that collided with an LAPD cruiser in Beverly Hills, killing a veteran training officer, waived his right Wednesday to a hearing to determine whether there was sufficient evidence to proceed to trial on a felony count of gross vehicular manslaughter.

Roberto Maldonado, 47, of Pacoima, was ordered to return to a San Fernando courtroom for arraignment June 22 after giving up his right to a preliminary hearing and instead proceed to trial.

Maldonado, who owns a dump truck company, is charged in the March 7, 2014, crash that killed Officer Nicholas Choung Lee near Robert Lane and Loma Vista Drive.

An investigation by the California Highway Patrol determined that Maldonado had failed to properly maintain and inspect the truck as required by his carrier permit and that the vehicle's brakes failed, according to Deputy District Attorney Jack Garden.

Lee, a 16-year veteran of the department, was pronounced dead at the scene. His female partner, who was just three months out of the police academy, was hospitalized overnight.

Last year, defense attorney Andrew Flier said of his client, "He has insurance. He did his best to maintain his business truck."

The lawyer said then that he did not think the case would have been filed the same way if the victim was not a police officer.

If convicted of the charge, Maldonado faces up to six years in state prison. He is free on bond.