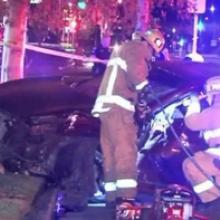 An off-duty LAPD officer was killed in a car crash in Simi Valley on Sunday. (KTLA)
Kate Mather
LA Times

An off-duty Los Angeles police officer was killed overnight when two cars, including one being used as an Uber, crashed in Simi Valley, authorities said.

Officer Heather Monroe was a passenger in the car that collided with the Uber at the intersection of Cochran Street and Sycamore Drive shortly after 2:10 a.m. Sunday, said Cmdr. Robert Brill of the Simi Valley Police Department.

Both drivers and a passenger in the Uber were treated for non-life-threatening injuries at a hospital, Simi Valley police said in a statement. Monroe, they added, appeared to be wearing her seat belt when the cars crashed.

Investigators had not yet pinpointed what caused the crash. Authorities said that it appeared one of the vehicles didn't stop at a red light at the intersection, but were still trying to confirm which car may have run the light.

Police are also looking into whether drugs or alcohol were a factor. Investigators spent 11 hours at the scene Sunday, photographing the wreckage, examining the debris strewn across the intersection and looking for video that may have captured the crash. They asked anyone who may have witnessed it to call police.

Uber and other popular ride-hailing services are frequently touted on New Year's Eve and other holidays as a way for revelers to avoid driving after drinking. The passenger in the Uber did just that, Simi Valley police said, calling for a ride after "consuming alcohol during a New Year's Eve celebration."

"Our thoughts and prayers are with the officer's family, the LAPD and the law enforcement community," a spokesman for Uber said in a statement. "We are thankful police have confirmed our driver partner and her passenger were not seriously injured and wish all the injured parties a speedy recovery."

Monroe, who lived in Simi Valley, joined the LAPD in 2009, according to department records. The 30-year-old officer was assigned to the Devonshire station in the San Fernando Valley, and had previously worked at the LAPD's jail in Van Nuys and the department's Mission division.

An LAPD spokesman called Monroe's death a "tragic start" to the new year.

"Losing an officer is devastating, but the pain is intensified for the men and women of the department when it happens during what is supposed to be the happiest time of the year," the spokesman, Josh Rubenstein, said in a statement.

News of the deadly collision quickly spread throughout the LAPD Sunday morning after officers saw reports that an off-duty cop had been killed.

Detective John Lamberti was one of those officers. When he learned that the crash had happened in Simi Valley, he said he immediately thought of his friend who lived there, Heather, and hoped it wasn't her.

Lamberti and Monroe worked together at the Van Nuys jail in 2011, both fresh off the probationary period for rookie cops.

Monroe was unflappable, Lamberti said, never rattled by even the most difficult inmate. She was smart with a good sense of humor, compassion and a presence that made people want to be around her, he said. When Monroe told stories about what she had seen as an officer, he added, "you could tell she genuinely cared about the people."

"She was absolutely the embodiment of everything that an LAPD officer should be," Lamberti said. "It's just an absolutely devastating loss - not just for her friends and family but for the city in general. She was going to do great things in this department."

Lou Turriaga, a director for the union that represents rank-and-file LAPD officers, spent Sunday at roll-call meetings with officers who worked with Monroe. Many were distraught, he said, and were offered time away from work to process the news.

But, Turriaga said, even those who didn't know Monroe were rattled when they learned that an officer had been killed - himself included.

"It hits you hard," Turriaga said, pausing as he spoke. "It takes the air out of you."