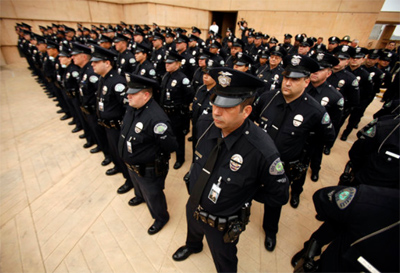 Hundreds of uniformed police officers gathered in downtown Los Angeles early Tuesday to pay their final respects to a veteran LAPD motorcycle officer who died earlier this month after being struck by a driver suspected of being under the influence of cocaine.

A 26-year veteran of the LAPD, Christopher Cortijo, 51, had been assigned to the Valley Traffic Division when he was struck from behind on April 5 by an SUV.

At a funeral Mass at the Cathedral of Our Lady of the Angels, colleagues remembered him as a man who so cherished his role as a motorcycle cop that he wore a leather motorcycle jacket even in the soaring San Fernando Valley heat. He was known throughout the department for his large mustache, his sense of humor and his compassion, they said.

Cortijo, who served in the Marines before joining the LAPD, was a lifelong "Valley boy" who was proud of his roots, Mayor Eric Garcetti said.

LAPD Chief Charlie Beck has called Cortijo's death the "ultimate irony" because the officer had arrested more than 3,000 drivers suspected of being under the influence of drugs or alcohol.

Cortijo was rear-ended by a Chevrolet Blazer while stopped on his motorcycle at a red light near Saticoy Street and Lankershim Boulevard in Sun Valley, authorities said. Los Angeles Police Protective League President Tyler Izen said Cortijo ended up pinned between two vehicles.

Cortijo's death came during a particularly rough stretch for the department.

Last month, Officer Nicholas Lee was crushed to death when his patrol car was struck by an out-of-control dump truck. Lee's partner was injured. Two other officers have been injured recently in separate shooting incidents -- including one at a police station in Mid-City.

Lee's family was in attendance at Cortijo's funeral.

Bill Tatem, a retired Valley Traffic Division officer, was Cortijo's partner for so long that even though Tatem was no longer with the department, his cellphone was flooded with messages the day of the accident saying his "partner" had been in a terrible accident, Tatem told the hundreds of officers gathered in the cathedral.

Tatem had been trying to talk Cortijo into retiring, he said.

"I would tell him, 'There's life after LAPD, and life is good.' Chris would say he just wanted to get a few more years."

Tatem broke down as he spoke, sobbing, his voice echoing in the cavernous cathedral.

"Part of me feels that had I not been retired, Chris and I would still be working together, and I could have protected him. I always watched out for him," he said. "Chris, I love you. And I will always miss you. You were my best partner, friend and little brother. Until we partner up again, Chris Cortijo."