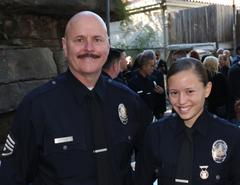 As hundreds of proud family and friends watch the newest batch of forty Los Angeles police officers march onto the parade grounds at the historic Los Angele Police Academy in Elysian Park tomorrow morning, one proud dad will know exactly what his graduating daughter has gone through to get to this moment.

Over three decades ago, then Police Officer and now senior Detective Tom Barnhart marched onto the very same field to graduate with his class, Class 3-81. Tom says the time has gone by in the blink of an eye, but in that time he's become a well-known senior detective in the San Fernando Valley, running the Robbery Table at the Mission Police Station.

Det. Barnhart also raised a son and a daughter in the Antelope Valley. Sam is his 23-year-old daughter and the soon-to-be newly branded Los Angeles Police Officer, Class 8-12.

"I am extremely proud of Sam and her commitment to become an LAPD officer," Det. Barnhart said. "I'll turn 53 years old on Saturday. Sam's graduation is her birthday present to me."

Det. Barnhart will join Police Chief Charlie Beck at the stage when the Chief hands Sam her diploma, and the special moment won't be lost on Chief Beck, whose LAPD father also marched these grounds and later watched his son graduate and then be sworn in as Police Chief.

From all of us at the LAPD Mission Police Station, we wish Tom and Sam all the best, congratulations, and be safe!

The graduation ceremonies will commence at 9 AM Friday. The Barnharts will be available for interviews after the ceremonies conclude. Det. Barnhart will be seated with Deputy Chief Kirk Albanese under the VIP canopy.