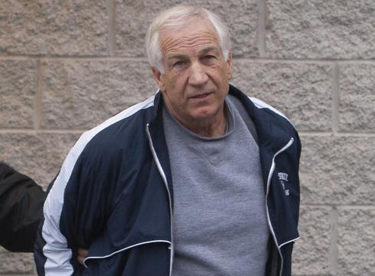 WASHINGTON - The FBI is changing its long-standing definition of rape for the first time to include sexual assaults on males following persistent calls from victims advocates who claim that the offense, as currently defined in the agency's annual crime report, has been undercounted for decades.

Under the current definition, established 85 years ago, many of the sex crimes alleged in the ongoing prosecution of former Penn State assistant football coach Jerry Sandusky would not be counted in the bureau's Uniform Crime Report, one of the most reliable measures of crime in the United States. Sandusky is accused in alleged assaults and sexual misconduct involving 10 male victims.

Rape is currently defined as the "carnal knowledge of a female forcibly and against her will."

The new provision will define rape as any kind of penetration of another person, regardless of gender, without the victim's consent. It also includes a broad range of rapes involving both males and females in which attackers use objects to penetrate their victims.

"Rape is a devastating crime and we can't solve it unless we know the full extent of it,'' said Vice President Biden, who worked closely with advocates on the issue. "This long-awaited change to the definition of rape is a victory for women and men across the country whose suffering has gone unaccounted for over 80 years."

Attorney General Eric Holder called the change "long overdue'' and added that the new provision will "provide us with a more accurate understanding of the scope and volume of these crimes.''

Carol Tracy, executive director of the Women's Law Project, and 90 other organizations that support victims of sexual abuse have been pushing for such a change for more than a decade, saying that the public has long been "misled" about the prevalence of rape.

"If you can't measure it accurately, you can't monitor it and you can't direct appropriate resources to deal with the problem," Tracy said.

At stake are tens of millions of dollars in federal and state aid which flow to victims of sex crimes. The budgeting and distribution of that money has been based partly on the measures contained in the FBI's crime report.

In September, a survey of major city police chiefs found that 80% believed the old definition was "not adequate," according to the review by the Police Executive Research Forum, a Washington, D.C., think tank.

"The crimes are still being prosecuted under state law, but the current definition is not a true reflection of the nature of sexual assault in the United States," said Chuck Wexler, executive director of the police research group.

FBI Director Robert Mueller has approved the change, which will be phased into the data-collection process over the next two to three years.

The FBI's action is part of a broader national re-assessment of how rape and sexual crimes are reported and tracked in the United States.

Last month, the National Academies Committee on National Statistics launched a review on behalf of the Justice Department's Bureau of Justice Statistics, which produces the National Crime Victimization Survey.

The 21-month study will examine how information about sex offenses is collected; it also will assess the quality of data published by BJS's National Crime Victimization Survey. The survey gathers information from victims to assess the prevalence of crime. The separate FBI report receives its data from local law enforcement agencies.

Although the separate reports are aimed at providing a more thorough measure, they offer very different accounts of sexual assault in the United States.

Carol House, the committee's study director, said the FBI statistics are believed to represent the lower estimate of rape in the United States, largely because of the confines of the old definition. The victimization survey, she said, provides "a middle range,'' that doesn't account for untold numbers of victims who are not comfortable sharing such personal information with surveyors.

"One of the problems is how you get somebody to agree to talk about something like this in a meaningful way while assuring that their (identities) will remain confidential,'' House said.