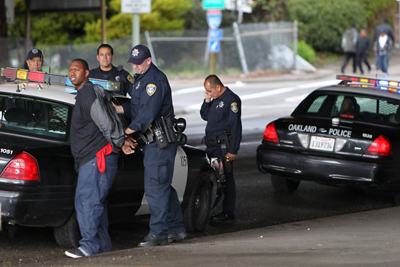 Police block of the intersection along High Street after a high speed chase, in pursuit of four burglary suspects with a pistol and a shotgun, Thursday March 15, 2012, in Oakland, Calif. Three weeks before a federal judge will hear arguments to decide whether Oakland should hand over its Police Department to federal authorities, attorneys for one of the parties filed a searing critique against the embattled law enforcement agency. (Lacy Atkins, The Chronicle / SF)

Oakland's over-the-top homicide rate is only the most obvious problem when it comes to the city's explosion in crime.

Although killings are tragic and make the news - and Oakland has already exceeded its total for all of last year - many more residents are falling victim to auto and home burglaries. Those are up a stunning 43 percent from last year.

Police Department figures show that as of Sunday, 11,081 homes, cars or businesses had been reported broken into so far this year. That translates to about 33 burglaries a day, or about one every 43 minutes.

The most popular targets are cars. A total of 5,743 have been broken into so far this year - 2,511 more than during the same period last year.

She suspects there's a direct correlation between the crime spike and the city's steady loss of police officers in recent years. "That's the issue we all should be focusing on," Kernighan said.

If the problem is a shortage of patrol cops, things are going to get worse.

According to police, Oakland will be down to 605 cops by February - 200 fewer than the city had in 2008. Another 40 will graduate from the Police Academy soon thereafter, but they'll be raw rookies.

"We are hiring officers as fast as we can, but that takes years," said Councilwoman Libby Schaaf. "We need to start contracting with outside agencies like the Alameda County Sheriff's Department to get more cops out on patrol now."

Mayor Jean Quan is on a trip to China, but her office issued a statement saying she supported the call for more officers. It said she hopes to have a plan with the Sheriff's Department worked out "very soon."

Considering the numbers, the sooner the better.