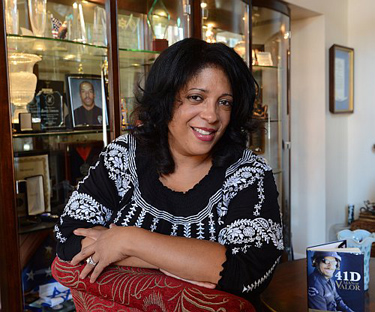 Lisa Simmons poses on Aug. 22, 2012 with her new book on her late husband Randal and many of the tributes to the LAPD SWAT officer who was killed in the line of duty. (Brad Graverson/Staff Photographer)

People are always asking Lisa Simmons when there will be a movie about her husband.

Randy Simmons, a 27-year Los Angeles Police Department veteran, was shot and killed in February 2008 during a SWAT raid of a house in Winnetka.

The first-ever killing of an LAPD SWAT officer in the line of duty stunned the department and much of the city. Ten thousand people came to his funeral at the Crenshaw Christian Center, known as the "Faith Dome."

And seemingly thousands more have wanted to see his story brought to life.

In late 2010, Lisa Simmons, a Rancho Palos Verdes resident, sat down to start writing what she thought would be a screenplay.

Instead, it became a book, the just-released "41D -- Man of Valor," named for Randy's police radio handle. Lisa Simmons is hosting a book launch Friday not far from downtown L.A. and will hold future events, including a signing.

She said she wrote the book mostly as a historical record for her and Randy's two children and their future descendants.

It's also for those who didn't get to meet Randy Simmons. Lisa said people still walk up to her in public and tell her, "I just wish I had known him."

For all the news stories and tributes, Lisa Simmons said, no one outside the family knows all sides of the man she was married to for 17 years.

"He's on the LAPD SWAT team, but that wasn't his life. That was just a part of his life," she said.

The main narrative of the book starts when Randy Simmons was 14 and upset about his family's impending move from Long Island, N.Y., to California.

It paints a portrait of a man who approached everything he wanted in life with the same discipline and dedication.

As a teenager set on making the high school football team, he walked around with ankle weights and persuaded his mom to give him extra steak so he could bulk up. Later, he brought that zeal to the tough physical regimen of a SWAT officer and stayed in as good shape into his 50s as men two decades younger. 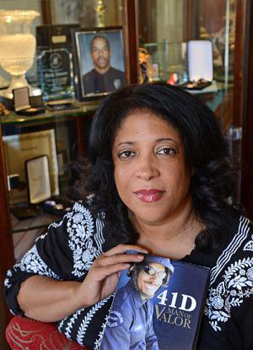 Lisa Simmons, the widow of LAPD SWAT officer Randal Simmons, who was killed in the line of duty, has written a book about her late husband, "41D: Man of Valor." (Brad Graverson/Staff Photographer)

Simmons was a tough police officer, but also a gentle man and devout Christian who prayed for the victims he saw and for the people he arrested.

He returned on his own time to the same tough neighborhoods he policed, starting a church outreach group for the children he called the "Glory Kids."

"He had compassion for the lost, the lonely, the sick, the poor, and the brokenhearted," Lisa Simmons writes in the book.

A fellow officer told Lisa a story about a time it appeared they might arrest a man wearing gang colors. Instead, Randy started to talk to him, asking, "Do you go to church? Do you know Jesus?" They talked about how the man used to go to church with his grandmother, and Randy invited him to his own church.

Soon -- to the other officer's amazement -- the gangbanger and the SWAT officer were hugging.

Simmons was 51 and planning to retire in a few years when he was called to an incident involving an armed man, something that had happened uncounted times in his nearly 20 years in SWAT.

The call on Feb. 6, 2008, was to the San Fernando Valley. Edwin Rivera, a mentally disturbed 20-year-old, already had killed his father and two brothers that night. He called 911 repeatedly and told police, "Come get me," along with nonsensical rambling.

Believing -- correctly, it turned out -- there could be someone alive in the house, police summoned a SWAT team, which quickly formulated a plan.

As eight officers went into the house, Rivera fired, hitting Simmons and another SWAT officer, James Veenstra, who was shot in the jaw but survived.

(The book uses the pseudonym "Johnny Verman" for Veenstra at his request.) Hours later, Rivera was shot dead by a sniper as he left the house. His father's girlfriend had escaped to safety.

Lisa Simmons writes that she was awakened by a phone call telling her, "Your husband has been shot." She didn't believe it, thinking he must be downstairs since he hadn't woken her to tell her he was leaving, as he always did when called to work in the middle of the night.

For some reason, he let her be that night, perhaps because she had a cold and needed her sleep.

In the book, Lisa Simmons praises the LAPD's supervisors and rank and file for their support in the wake of the tragedy. But she also criticizes the department for her inability to get clear answers about the results of the investigation and her exclusion from a formal departmental hearing.

Officer Karen Rayner, an LAPD spokeswoman, said commanders had not read the book and could not comment in detail on the criticism. Speaking generally, Rayner said the department followed its policies in the aftermath and never intended to cause Lisa Simmons any distress.

For two years, Lisa Simmons felt as if she did little but go to events in honor of her husband and raise their two teenagers. The constant reliving of the events of the fatal night made it hard to heal, she said.

In late 2010, she started writing down thoughts on her husband's life. The process was tough, but "therapeutic," she said. She sat at her kitchen table, writing longhand or on a computer, alternately laughing, crying and screaming.

Over the years, she and her children have slowly healed. Matthew, 20, plays football for Washington State, just as his father did in the 1970s.

Gabrielle, 18, is a freshman at Southern University in Louisiana. And Lisa Simmons is married to William Jones, whom she met in 2010.

She didn't tell a lot of people she was writing a book, partly because she wasn't sure it would ever be published. She considered just writing a manuscript so her children would know the story.

In the end, she decided the world needed to hear his story, too. Even if Randy Simmons wasn't the type to seek attention, his life of service holds a lesson, Lisa Simmons said.

"You can talk about it or you can be about it," she said.