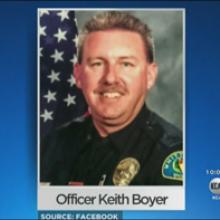 Funeral arrangements for Whittier police Officer Keith Wayne Boyer, who was killed in a shooting that also left a second officer wounded, were announced Thursday.

A memorial service at 10 a.m. March 3 at Calvary Chapel Downey, 12808 Woodruff Ave., will be followed by a procession to Rose Hills Memorial Park, 3888 Workman Mill Road in Whittier, for a graveside service for the 53-year-old officer.

Boyer was killed Monday morning while responding to a crash near Colima Road and Mar Vista Street. Police say one of the people involved in the crash pulled out a gun and opened fire.

Officer Patrick Hazell, a three-year veteran, was shot in the abdomen but survived and is recovering at home. Boyer, a grandfather, musician and school resource officer, had been with the department for 27 years.

The suspect, Michael Christopher Mejia, 26, was shot in the back and remained hospitalized with injuries that are not considered to be life-threatening.

The Whittier Police Officers Association has created a fund for people to make donations on behalf of Boyer and his family.