Skip to main content
22
Apr 2012
With growing number of parolees in San Fernando Valley, LAPD scrambles to keep its eye on them 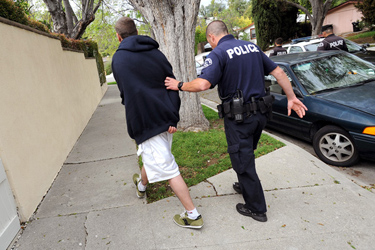 A parolee is led away in handcuffs after guns were found in his home April 12, 2012. (Andy Holzman / Staff Photographer)

The children playing and laughing in the backyard next door couldn't see it, but police officers had forced open a safe in their Woodland Hills neighbor's garage and found a collection of guns and rifles.

The team led by LAPD Sgt. Jeff Nuttall had gone to the home to check on Byrone London, who had recently served a prison sentence for obstructing and resisting arrest.

London was supposed to stay away from weapons and drugs or risk ending up back behind bars. But here he was, living in a relative's house where firearms were stored and, officers believe, facing a risk of abusing drugs again.

His wife, who lives in the house with him, was arrested there for possession of methamphetamine only weeks before, according to police.

"Here's a meth head with a safe full of weapons," Nuttall said. "What if he gets high and decides to open it?"

But Nuttall's frustration was not just with this particular individual. Rather, he and many local officers and government officials are concerned about recent reforms to the state justice system that they believe have led to less effective monitoring of criminals when they are back on the streets.

One of the changes, for example: In the past someone like London would be supervised after his release by an armed state parole officer. Under realignment, he is monitored by county probation officers, most of whom do not carry weapons.

Under realignment, local jurisdictions took over responsibility for a new category of supposedly less-dangerous ex-con, called a "post-release supervised person" or PSP.

The term refers to someone who, like London, served his or her last sentence for a nonviolent, nonserious, nonsexual offense. 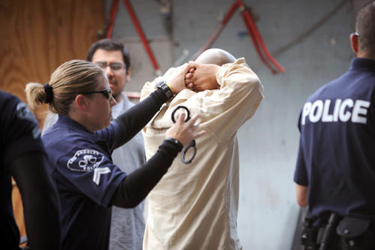 A parolee is cuffed during a compliance check in Canoga Park April 12, 2012. (Andy Holzman / Staff Photographer)

They can be defined that way even if earlier in their criminal careers they had served time for murder, rape or other serious offenses.

LAPD is not supposed to be the lead agency for performing compliance checks on PSPs, but the department prefers to keeps tabs on them anyway for the sake of public safety in its jurisdiction.

Earlier in the day, the same team from LAPD's Topanga Station had arrested another PSP, Jorge Sandoval, after finding a sword in his bedroom and meth, cocaine and marijuana near his dog food container.

Nuttall complained this was their second time arresting Sandoval for a drug offense over the last few weeks, and wondered whether the PSP was receiving adequate supervision.

"Compared to parole officers, probation officers are slow in calling violations," he complained.

Police noted that Sandoval had previously served a prison term for kidnapping and domestic assault. But he was still defined as a lower-risk PSP, rather than a parolee, because his last offense was drug-related.

Confidentiality laws barred the county Probation Department from detailing the agency's interactions with Sandoval and London, including whether they had been checked on before and found to be engaging in any inappropriate or illegal behavior and what sanctions they may have faced.

But Reaver Bingham, Probation's deputy chief in charge of realignment, said arrest is not always the appropriate response to violations.

"Realignment doesn't mean that everybody's going to wind up going to jail or prison because of a particular behavior," he said.

"It'll depend on the egregiousness of the behavior, public safety considerations, and whether intermediate sanctions can correct the behavior."

Those intermediate sanctions range from verbal admonishment to house arrest, electronic monitoring and flash incarceration. Warrants are issued only for those with severe violations, including absconding.

The statistics from the first six months of realignment offer a mixed picture.

On the other hand, far more PSPs are failing to initially report to their probation officer. 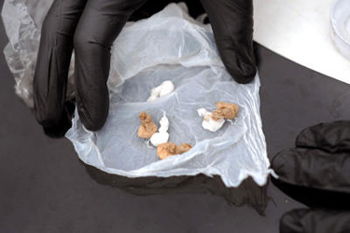 Robert Stickney, Probation's director of executive support, compiled data indicating that as many as 6 percent of the estimated 6,000 PSPs placed under Los Angeles County jurisdiction have never reported to their probation officer.

"This rate is higher than the state's traditional initial parole absconder rate of 2 percent, and may be attributable to factors such as 'testing' to see how the new system responds, having new locations to report to, among other reasons," he said.

Before Nuttall's team even left the police station, they had to scratch the names of half the 10 PSPs off their list because of bogus addresses - one was that of a Burger King.

Police Officer Misty Goodnight, a member of Nuttall's team, complained that it was difficult to find many PSPs because Probation didn't seem to be going after those giving fake addresses. One person on their list, she noted, had 31 felony bookings on his record, but they couldn't find him because he gave a bad address.

"I haven't seen anything happen," she said. "We'll run these guys up months later, and we won't come up with warrants or anything in the system."

Realignment mandates that the CDCR send Probation packets of information about inmates months before their release, so that law enforcement can verify their addresses.

"Whoever is supposed to be giving me that information, I'm not getting it," Nuttall said.

Both the state and county did not have adequate time to prepare for realignment, and in the early days of the new system, PSPs would sometimes arrive in counties before their information packets did.

Probation had sought to have about 80 new staffers in place before realignment took effect, but the Board of Supervisors approved only 50 new staffers and only at the last minute.

For months, Probation had to make do with existing staff, so that some of them had to double or triple their caseloads.

The county Board of Supervisors continues to push the state to guarantee funding for realignment, rather than it being dependent year-to-year on the Legislature and governor. The Legislature has refused to make the funding permanent, but the governor hopes voters will approve a ballot measure in November that will lock in the guarantee for local governments. 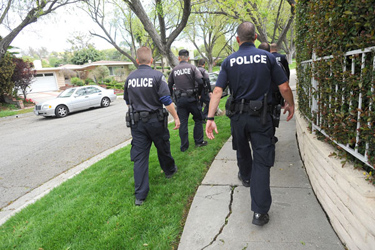 Members of LAPD's Parole Compliance Unit make their way up to a Woodland Hills home before conducting a compliance check on a parolee April 12, 2012. (Andy Holzman/Daily News Staff Photographer)

Dana Toyama, spokeswoman for the California Department of Corrections and Rehabilitation, said it is too early to make judgments about realignment.

"We're only a few months in, and full implementation isn't even expected until around the fourth or fifth year, so to call it a failure or a smashing success is incredibly premature."

Nevertheless, she believes the transition has gone smoothly.

In the meantime, Nuttall's team continues to monitor the PSPs whose addresses they do know, showing up in force at locations where they could encounter armed felons.

When the team of eight officers in four cruisers swooped down on the home where London was staying, the size of the police presence elicited complaints from the PSP.

"This is very excessive," a handcuffed London said in a brief interview in front of the home as officers searched inside. "Look at how many police are here! And they just walk into my house like this. And it's not even my house. They're pulling my kid out of his room."

London also said he felt he got no help from the county in terms of re-entry services after he left prison.

"They did nothing," he said.

He said he had to seek out drug rehab on his own, adding that he had attended a session that morning before the officers showed up.

Nuttall said a strong police presence is needed on the PSP checks because many of them could be more dangerous than their classification indicates. London, for example, had previous bookings for attempted murder, willful cruelty to a child, domestic violence, burglary and hit-and-run, according to LAPD.

Nuttall pointed out that under the legislation, even a convicted murderer or sexual predator could be classified as a PSP as long as his or her last offense was nonserious, nonviolent and nonsexual.

"Some of the people who are on this program are absolutely dangerous career criminals," he said.

"Imagine if they were in your neighborhood."