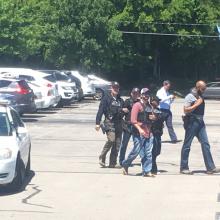 An inmate was fatally shot after attacking a deputy during transport.

According to The Tennessean, two deputies were transporting the inmate to an outpatient clinic Wednesday when the inmate grabbed an officer’s gun and shot him. The deputy was critically injured and transported to a local hospital. The extent of his injuries is unknown.

The other deputy returned fire, killing the inmate. The clinic tweeted that the threat was contained.

The hospital was on lockdown while officers clear the building.