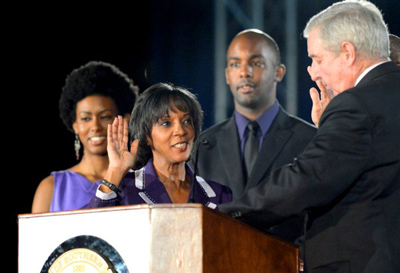 Jackie Lacey took the oath of office Monday as Los Angeles County's first female and first African-American district attorney since the office was created in 1850.

"To the people of Los Angeles County, protecting your safety and maintaining the integrity of the justice system will be my top goals as your district attorney," she said during the ceremony at USC's Galen Center.

"Together, we will make the neighborhoods of Los Angeles County safer."

Lacey, whose parents moved to L.A. to escape racism in the South in the 1950s, was grateful to break the glass ceiling that had covered the DA's Office for 162 years.

"Today, the voters of this county allowed us to witness that it is possible for a girl from a working-class neighborhood like the Crenshaw District, who was educated in a public school like Dorsey High School, and worked her way up from the bottom can become the district attorney of the largest prosecutorial office in the nation," she said to cheers from the crowd. 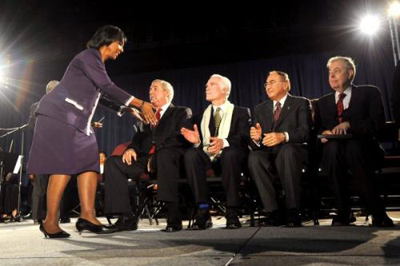 Lacey's predecessor, Steve Cooley, administered the oath of office during a ceremony attended by all but one of the former district attorneys since 1975 - Gil Garcetti, Robert Philibosian and John Van de Kamp.

Together, they gave Lacey the district attorney's badge, with Van de Kamp jokingly telling her, "My advice to you today, among other things, is to learn from our mistakes - I'm sure there were one or two - and whatever successes that we achieved."

On a more serious note, however, Van de Kamp also told her, "Be your own person. You have experience; you won the office on merit; you broke the glass ceiling, but you'll be working in a different time with different challenges."

Among those challenges is realignment, a shift of many public safety responsibilities from the state to the county, including the incarceration and probation supervision of thousands of low-level criminals.

Cooley, who retired after 12 years - three consecutive terms - as DA, said he felt "very, very good about leaving (the DA's office) in good hands and in very, very good shape."

"I think the future is bright for the criminal justice system here in Los Angeles County," he added.

Lacey, who had been Cooley's second-in-command, defeated prosecutor Alan Jackson in the Nov. 6 general election.

As DA, she will oversee the largest local prosecutorial office in the nation, which has a budget of $328 million, and almost 1,000 attorneys, 300 peace officers and 800 support staff.

Lee Smalley Edmon, the first woman to serve as presiding judge of the Los Angeles County Superior Court, said Lacey is a "a reminder that we can't set our sights too high for what women can do in this profession.

"(Lacey's) election sends a powerful message to everyone in the DA's Office - in fact to everyone in our profession - that with a lot of hard work, anyone can be a success in this profession, regardless of his or her race or gender."

Lacey, who now lives in Granada Hills, graduated from UC Irvine and the USC Law Center. She joined the DA's Office in 1986, and worked her way up through the ranks.

Among her achievements to date are helping create alternative sentencing courts to deal with specific nonviolent officers, such as women, veterans and the mentally ill. She also helped create the nation's first animal cruelty and graffiti prosecution programs.