Authorities are warning travelers to stay away from the northbound 405 Freeway over next month's long Presidents Day weekend, when the roadway will be partially closed while construction crews pave the route's new carpool lanes through the Sepulveda Pass.

The closures will occur from Getty Center Drive to Ventura Boulevard at the following times:

Ramps in the Sepulveda Pass will begin to close around 7 p.m. on Feb. 14, the Los Angeles County Metropolitan Transportation Authority said. Work is expected to begin at 11 p.m. Feb. 14 and end at 6 a.m. Feb. 18.

Two northbound lanes will remain open during the day that weekend. 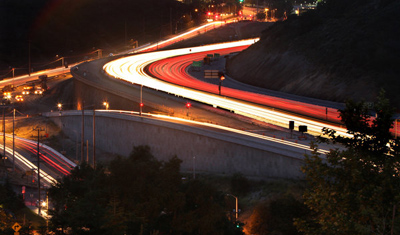 The southbound 405 will remain open during the daytime over the holiday weekend, but some lanes may close at night, according to the MTA.

The closure, dubbed "Jamzilla" by transportation officials, follows snappily named freeway closures (including "Carmageddon" and "The Rampture") as part of the ongoing 405 expansion project. The effort to add 10 miles of carpool lanes to one of the most congested freeways in the country has seen months of delay and millions of dollars in extra costs.

Completing the work over one long weekend will eliminate the need for several consecutive weekends of full closures, officials said in a news release.

Sepulveda Boulevard cannot handle all the diverted traffic from the 405, so drivers should seek alternative freeway or surface-street routes, officials warned.

The project's expected completion date is now sometime in 2014, a year later than originally anticipated.