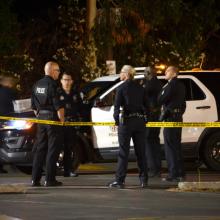 One man was killed, and another one was wounded late Thursday, June 18, 2020, in a shooting that occurred in the parking lot between Vons and CVS near the corner of Laurel Canyon and Ventura boulevards in Studio City. (Photo by Rick McClure/Special to the Los Angeles Daily News)
Josh Cain
Los Angeles Daily News

Los Angeles Police Chief Michel Moore said Tuesday that he is alarmed at a significant jump in homicides this year even as other crimes in the city have plummeted.

With a recent spike in killings, the rate so far this year has eclipsed the rate during the same period last year, when there was no coronavirus pandemic keeping people inside, Moore said.

During the first few weeks of summer, that gap has increased — in just 10 days, at least six people have been killed, according to the chief’s statistics compared to citywide crime numbers released last week. On July 11, the increase in homicides this year over last was 12.7 percent.

“The homicides are a direct result of the increase in shooting violence over the last four weeks,” Moore said at the Los Angeles Police Commission meeting Tuesday. “115 people in the city of Los Angeles were shot in that 28-day period. The previous period was 102; the goal was 76.”

Many of those killings and shootings have occurred in South Los Angeles, with some also occurring in LAPD’s Central Division — which includes downtown, Northeast and East L.A. and parts of Hollywood — and in the Foothill Division in the San Fernando Valley.

While Moore tied some of the rise in killings to gang violence, as people return to the streets after months cooped up inside, he said police couldn’t identify just one factor. He said some of the killings spilled out from street fights, while others were at-home killings involving romantic partners.

He said there wasn’t one trend pointing to why shootings were increasing. But he said police also were looking at the stresses of the fallout from a collapsing economy, where the “circumstances of lost livelihoods and employment and housing,” might be contributing to the violence.

He said he was concerned that city efforts, like Gang Reduction and Youth Development program in Mayor Eric Garcetti’s office, might have been unable to hit the streets as often as they could before the pandemic. The program sends ambassadors to neighborhoods where gang violence is common in an effort to resolve personal disputes instead of allowing them to fester into deadly encounters.

Moore said that while he wasn’t aware that those GRYD teams were facing obstacles due to the pandemic, he said he’s “concerned about what may be developing, and I want to get as close to the ground as possible to understand what’s driving this.”

The fall and rise of killings this year mirrors a city in which daily life changed radically with the onset of the coronavirus pandemic.

In the weeks after the first stay-at-home orders, both violent and property crime was down massively compared to years past.

With fewer people on the streets, thefts have fallen more than 30 percent over last year. Robberies are down more than 16 percent.

Other crimes remained stubbornly high, and are likely being stoked by those same changes — thefts of motor vehicles jumped more than 30 percent this year, with more than 10,000 vehicles stolen already in 2020. Police have said most likely the availability of cars left unattended for weeks on city streets is driving the increase.

Police worry others are not being reported — hundreds fewer rapes have been reported to LAPD this year than last year. LAPD statistics show rapes are down more than 26 percent.

Moore said Tuesday he feared people staying at home with no access to third parties who might report sex crimes, like teachers or social workers, is driving the decrease.