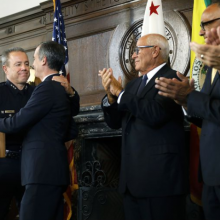 Los Angeles Mayor Eric Garcetti announced Monday that he had chosen Michel Moore, a 36-year LAPD veteran known for his mastery of subjects including crime statistics and budgets, to be the city’s next police chief.

For Garcetti, who is contemplating a run for president, Moore offers the security of a proven administrator who has headed every major branch of the department. But the choice disappointed some who had hoped Garcetti would appoint the city’s first Latino police chief.

At an afternoon news conference, Garcetti described Moore as “one of, if not the most, qualified law enforcement professionals in America, acknowledged by everyone for his exceptional intelligence.”

“I’ve seen his work personally,” the mayor added. “No one works harder. No one reads more. And no one has a greater breadth of experience.”

Moore, 57, who runs the LAPD’s patrol operations, was one of three finalists chosen by the civilian Police Commission from a field of 31 applicants to lead one of the nation’s largest police departments.

“One of the most important questions of the moment may be, ‘Why do I want to be the next chief of police of this great city?’ And it’s pretty simple. I wish to continue the momentum in building trust, particularly in communities of color, and improving public safety,” Moore said.

Moore said he also wants to make the department “more diverse and representative,” while continuing to support those who work for the Los Angeles Police Department.

Arcos, a third-generation Mexican American, had the backing of some powerful Latino civic leaders and would have been the first Latino chief of a city that is nearly 50% Latino. Scott, who is African American, had strong ties in South Los Angeles after heading the LAPD’s South Bureau. Of the three, Moore has the most experience at the highest echelons of the LAPD.

Councilman Gil Cedillo and a group of former elected officials from L.A.’s Eastside had argued that hiring Arcos would send a message at a time when the Trump administration has “declared war” on immigrant communities.

After the mayor announced his pick, Cedillo struck a somewhat muted tone, noting that Garcetti’s announcement is only one step in the process. Moore must still be confirmed by the City Council, which will decide “what experience matters most and who the next police chief will be,” he said in a statement.

“I look forward to engaging in a rigorous vetting process with my colleagues to ensure that our city and our police department’s leadership reflects the best of what our city is and can be,” said Cedillo, who represents neighborhoods from Westlake to Highland Park.

In picking the next police chief, Garcetti said he was not “looking to fill a demographic or to make history.”

“I wanted the best person for the job, and that was Mike Moore,” he said, noting that an African American is in charge at the airport and that the city’s fire chief is Latino.

Moore’s father was Basque, and he is listed on department rosters as Hispanic. On Monday, he reiterated the LAPD’s longstanding policy that its officers’ primary focus is public safety with no active role enforcing civil immigration laws.

“They can have that confidence in us, because their status, whether they are here lawfully or otherwise, is not a police matter, as it has not been for more than 40 years,” he said of immigrant residents.

Moore had faced the possibility of becoming a perennial also-ran, having been a finalist when Chief Charlie Beck was chosen in 2009 and recently failing to secure the top jobs in Dallas and San Diego.

In a statement, the Los Angeles Police Protective League, which represents sworn officers, congratulated Moore and pledged to work closely with him to improve morale among the rank and file.

“We are hopeful that if Chief Moore is appointed, he will take immediate action to address low officer morale stemming from our critically low police staffing and that he will be absolutely committed to collaborating on new ideas to reduce violent crime and prepare our city for the 2028 Olympics,” the statement said. “These are huge issues to tackle, but we’re ready to roll up our sleeves and get to work with Chief Moore to move our Department forward and improve public safety in Los Angeles.”

The new chief will face heavy public scrutiny of his department’s use of force, sparked by the fatal shootings of black people in police encounters nationwide, including some controversial shootings by LAPD officers.

The LAPD has made strides in improving its once-abysmal relationships with black residents. But, according to a 2016 survey commissioned by the LAPD, African Americans have significantly less trust in police officers than other residents do, with only a third saying that people of all races or ethnicities are treated fairly. Black Lives Matter activists have been a regular presence at Police Commission meetings, often disrupting the proceedings and calling for Beck to be fired.

Melina Abdullah, a Cal State L.A. professor and a leader of the local Black Lives Matter movement, said Moore was the worst choice of the three finalists because he is deeply entrenched in the LAPD’s leadership.

Garcetti “chose to appoint the person who’s the most disconnected from the community,” Abdullah said. “That is an indication of what he thinks of community engagement and meaningful reform for policing.”

Connie Rice, a longtime civil rights lawyer who has partnered with the LAPD on community policing strategies, said she hopes Moore will continue the gang intervention and community policing programs implemented by Beck and his predecessor, William J. Bratton.

“I am looking forward to working with Chief Moore on reform,” Rice said. “He is going to be running the next leg of this reform relay.”

Moore, who pulled the trigger in two shootings as a young police officer, said the LAPD will continue to train officers to give them the best chance of preserving their own lives as well as the lives of suspects.

“The use of deadly force by a police officer — there is no other decision in policing that carries with it more responsibility and is also, frankly, the one that every officer wishes they will never be called upon to make,” Moore said.

When Beck announced his retirement in January, Garcetti said there were many good candidates for chief who were from the LAPD or had recently left the agency. The police commissioners chose the three finalists from that pool — an indication that they want the LAPD to continue on the course set by Beck, whose last day on the job is June 27.

There was speculation that perhaps the moment was ripe for the city’s first female police chief. But an early favorite, Assistant Chief Beatrice Girmala, did not apply, and retired Assistant Chief Sandy Jo MacArthur did not make the final three.

As a boy growing up with six siblings, Moore moved constantly while his parents looked for work. He remembers a Christmas night in Flint, Mich., when officials came to repossess the family station wagon. While living in Arkansas, his stepfather suggested that he stop using his Basque last name, Sanchotena, because of the racial prejudice there. He has been Michel Moore ever since, with “Michel” pronounced like “Michael.”

In 1985, four years after joining the LAPD, Moore shot a man at a downtown loading dock who pointed a handgun at truck drivers and then aimed at him, according to a report by then-Chief Daryl Gates. The man survived, and Gates found that the shooting complied with department policy.

A year later, while moonlighting as a security guard at a shopping mall in the San Fernando Valley, Moore killed a man who was firing a semi-automatic rifle in the parking lot. With parked cars obscuring his view, Moore was unsure what the man was firing at. The man pointed the rifle at Moore, who fatally shot him in the head, according to a report by Gates. It later became clear that the man was shooting at his ex-wife, killing her.

Gates praised Moore for “excellent self-control” and restraint but criticized him for not wearing a ballistic vest or carrying extra ammunition. Moore received the LAPD’s Medal of Valor, awarded to officers who display courage in the face of imminent peril.

At that point, he said, he was happy to join the department’s DARE program and teach kids about the dangers of drugs. Later, as a sergeant, Moore got his first taste of the wonky data-crunching he would become known for, creating the department’s first automated crime-mapping system.

After stints in internal affairs, Wilshire Division and vice, he was tapped to lead Rampart Division in 1998, the day after Officer Rafael Perez was arrested in a corruption scandal that came to define the department in that era. Officers in Rampart thought Perez was wrongly accused, Moore said. As a newly minted captain, he had to persuade them to abandon the “Rampart way.”

Under Bratton, Moore was deputy chief of West Bureau and then Valley Bureau. Soon after taking control of the department, Beck promoted Moore to assistant chief. Moore rotated through special operations, which includes detectives, counter-terrorism and SWAT; administrative services, including the behind-the-scenes realms of budget, personnel and training; and his current position, patrol operations.

Moore is by all accounts a demanding boss who expects his subordinates to be as versed in every detail as he is. Yet, he balances his high expectations with his recollections of what it was like to be grilled by an unforgiving superior.

He has been at the forefront of the LAPD’s efforts to reduce fatal shootings by encouraging officers to use Tasers and beanbag shotguns. He recently proposed a system to quantify positive community interactions such as public meetings and roll calls held on city streets.

Moore, who lives in Santa Clarita, has said he will move to L.A. if he becomes chief.