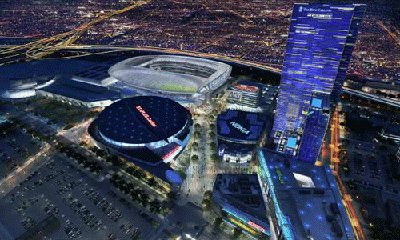 The plan to build a $1.2-billion NFL stadium in downtown Los Angeles took a big leap forward Tuesday when the City Council approved the overall framework for financing the project.

On a 12-0 vote, the council voted for a nonbinding agreement with stadium developer Anschutz Entertainment Group that allows for the demolition and relocation of a section of the Los Angeles Convention Center. That, in turn, would make room for a 72,000-seat stadium just south of Staples Center, which would open in 2016 with the planned name of Farmers Field.

Approval of the stadium plan would kick off nine months of intensive negotiations with AEG, which has promised to pay for the new stadium and two parking garages on its own dime. And it would allow city planners to press ahead with preparation of an environmental impact report on the project, which would assess such issues as traffic, noise and glare in nearby neighborhoods.

The city plans to issue $275 million in bonds to pay for the new Convention Center wing. Up to 49% of the new revenue generated by the two projects -- taxes and lease revenue -- would be used to pay off that debt.

City Administrative Officer Miguel Santana said a vote in favor of the tentative agreement would tell the council's negotiators that they are heading in the right direction. "It also signals to AEG that, in fact, we're serious about this, and they can begin their process and ... put their funding together," he said.

The council's three biggest stadium skeptics -- Bill Rosendahl, Paul Koretz and Paul Krekorian -- all fell in line behind the plan, saying they believed that taxpayers would be protected in the deal.

"I've looked at this and I've studied it and I've argued against it, as you have all heard," Krekorian told his colleagues. "And I have become convinced that the financial terms that have been negotiated by our negotiating team are such that the risks are minimal, if not non-existent." City officials expect the stadium to create more than 14,000 construction jobs and 6,300 permanent jobs while making it possible for the city to renovate its Convention Center at a time of tight budgets. Still, the proposal has drawn sharp questions from residents who live near the stadium site who are worried about the traffic that will pour onto local streets and the 110/10 freeway interchange.

Others contend that the city should be able to get a share of the profits from Farmers Field, and warn that the economic upside for AEG -- which owns nearby Staples Center and the L.A. Live entertainment complex -- has been significantly downplayed. Management consultant Quentin Fleming told council members that they should demand a 50-50 split on any revenue that is above the 6.7% investment return that is projected for AEG.

Consultants for the city have responded by arguing that AEG's financial return is too low to allow for "revenue sharing" agreements. AEG executives agreed but noted in a recent hearing that the company expects a "substantial" profit from the stadium.