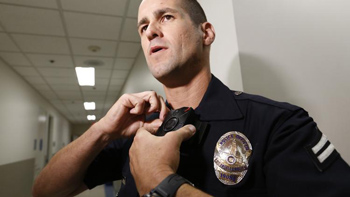 The Los Angeles Police Commission on Tuesday approved a five-year, $31-million contract between the LAPD and Taser International for more than 6,000 body cameras that, if approved by the city, would move the department another step closer toward becoming the largest in the U.S. to use the technology on a wide scale.

The proposed contract covers 6,140 Taser Axon body cameras - as well as replacements and upgrades - along with docking stations, unlimited data storage for the footage captured by the devices, and maintenance, support and licensing for the system, according to the agreement.

The contract, which will now go before the mayor and City Council for approval, also includes 4,400 Tasers.

Documents presented to the Police Commission on Tuesday showed that in all, the body camera program is projected to cost the city more than $57 million in the first five years. In addition to the $31-million Taser contract, the LAPD said it would need nearly $26.5 million to cover other expenses incurred during the full deployment of the cameras.

Those costs include cellphones that allow officers to review and sort camera recordings in the field and infrastructure upgrades and construction to install camera docking equipment at LAPD stations. The LAPD also plans to create a new unit to handle camera training, trouble-shooting and other technical assistance for officers.

The first year of the program was projected to cost around $10.3 million. About $5.5 million has been covered by the city's current fiscal budget and a grant from the federal government, according to LAPD documents.

Maggie Goodrich, the LAPD's chief information officer, told the commissioners that the department would reevaluate its contract with Taser International at the end of the five-year agreement.

Goodrich told The Times that if the contract with Taser is finalized soon, the LAPD could purchase and deploy more cameras by the end of this year. The LAPD expects to have all of the 7,000 devices on the streets by the end of 2016.

Los Angeles has drawn headlines in recent months for its plan to put a camera on every officer.

The LAPD already distributed 860 cameras this fall, purchased through private funds raised by Police Commissioner Steve Soboroff. Officers in the department's Mission and Newton divisions are among those that have already received the cameras. As of last week, the LAPD said, those cameras have recorded more than 64,000 videos totaling nearly 12,000 hours of footage.

"It's a new tool, so like any new tool there's always room for improvement as they get used to using the new technology," Goodrich said of the officers using body cameras. "But so far, we're pleased."