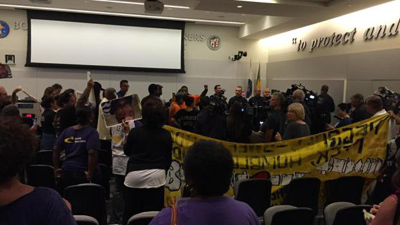 Two consecutive meetings of the Police Commission have been halted in recent weeks due to protests. (credit: Ed Mertz)

The Los Angeles Police Commission was expected Tuesday to consider a new rule that would allow for the removal of people who make "personal, impertinent or profane remarks" during a commission meeting.

Under the proposed rules requested by Soboroff, anyone who addresses the panel during the formal public comment would be required to behave in "an orderly manner and shall refrain from making repetitious, personal, impertinent or profane remarks regarding or directed toward any member of the board, staff, or the general public."

Attorneys with the American Civil Liberties Union (ACLU) and other opponents of the proposed policy say such a move could violate free speech rights and public meeting laws.

LAPD Lieutenant and police union leader Craig Lally told KNX 1070 NEWSRADIO he doesn't believe the protesters reflect the feelings of most people in the city at large.

"Most people out there support the police because they know that we're the difference between having a society or anarchy," said Lally.

Black Lives Matter activists - who have been attending Police Commission meetings since last year's fatal police shooting of Ezell Ford, an unarmed black man in South Los Angeles - were expected to meet with reporters prior to the Commission meeting.

In a statement, the group called the proposal "one of the most blatant efforts to silence an engaged public and a direct attack on their First Amendment rights and on Black Lives Matter as (sic) whole and African-Americans concerned with police brutality and police killings."

But according to Lally, at least some of the activists blamed for disrupting the Commission meetings aren't always concerned with specific LAPD issues.

"A lot of 'em are just anarchists or anti-government, so you just give them a platform and they'll protest and the hate comes out," he said.