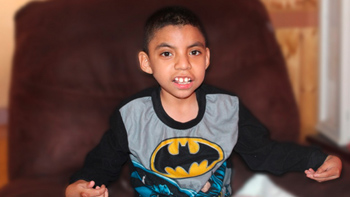 A photo of 9-year-old Giovanni from his GoFundMe.com page.

Police were searching Wednesday for the thief who broke into a woman's car and stole the orthopedic leg braces belonging to her 9-year-old son who suffers from cerebral palsy.

The break-in was discovered around 6:30 a.m. on June 9 by the boy's mother Analilia Ramirez, according to the Los Angeles Police Department.

The thief stole several items, including the vehicle's battery and miscellaneous tools worth over $250, police said at a news conference Wednesday.

But the biggest loss were Giovanni's braces, which he relies on in order to walk.

"Mr. Ramirez was the victim of a cold, heartless crime. A crime that is completely unthinkable to most," Peter Repovich of the Los Angeles Police Protective League said during a news conference Wednesday.

After learning what happened to the family, officers and other LAPD personnel pooled their money to replace the braces, police said. 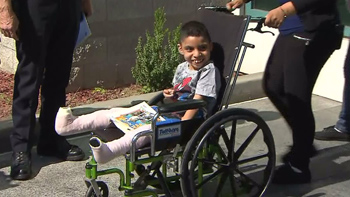 Unable to walk without his braces, Giovanni showed up for the news conference in a wheel chair, with casts around both legs.

Authorities have raised about $3,000 of their $6,000 goal to cover the family's costs of replacing the braces, Commanding Officer Jorge Rodriguez of the LAPD said.

The officers also called in a favor with Children's Hospital Los Angeles to get Giovanni a new set of leg scans.

"This tore at the hearts of this division," Beck said during the news conference. "This is not a high-income family ... that is a major, major financial catastrophe in this family's life so we want to turn this into something better and I know that the people of Los Angeles will help us do that," Beck said.

A donation account has been set up on GoFundMe.com for anyone wishing to help the family.

Anyone with information on the burglary was asked to contact Newton Area Auto Detective Robert Rivera at 323-846-6592.