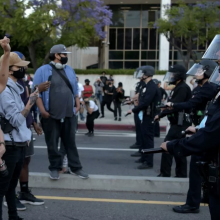 The Los Angeles Police Protective League and three other law enforcement organizations have launched a website to advocate for investing in better policing rather than defunding departments, they announced today.

The website investinpolicing.com includes an open letter to local, state and federally elected officials calling for investment in better policing and expanding community policing, adding that calls to defund or abolish police departments are dangerous.

The letter includes a list of ways to create mutual respect between members of law enforcement and the communities they serve:

-- Creating a national use-of-force standard that emphasizes a reverence for life, de-escalation, a duty to intercede, proportional responses to dangerous incidents and strong accountability provisions;

-- Implementing a national database of former police officers fired for gross misconduct that prevents other agencies from hiring them;

-- Establishing an early warning system that identifies police officers that may need additional training and mentoring.

The LAPPL was formed in 1923 and represents more than 9,000 sworn members of the Los Angeles Police Department, reflecting the interests of officers through legislative and legal advocacy, political action and education.