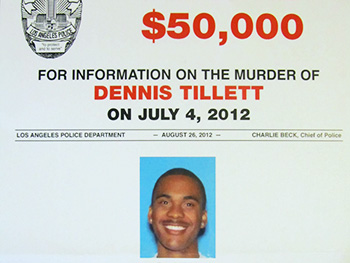 The Los Angeles Police Department and city of Los Angeles announced a $50,000 reward on Thursday for anyone with information about the individuals responsible for the murder of Dennis Tillett, 24, on July Fourth in South Los Angeles.

"We need assistance on this," said Sgt. Rudy Lopez. "We're not calling it a cold case, but it's still active."

Lopez said the announcement of the reward at a press conference was made in hopes of reminding the community of what took place and emphasized that tipsters would have their identities protected.

Tillett was celebrating the Fourth of July holiday with a group of people and standing outside a home on South Second Avenue, near Arlington Avenue and West 48th Street, when two male black suspects approached and began firing multiple gunshots toward the group.

The suspects shot four people, including Tillett who was taken to a hospital but died from his injuries. The other three victims survived.

Dave Garrido, supervising detective, said they have not had any leads, but hope the reward will be an incentive for those with information to come forward.

With little information to move the case forward, the suspects still remain at-large and Garrido said he understands the community's fear.

It has been a daily struggle said Fletcher, who thinks about her son everyday. She said Tillett's friends still call and text her to see how she is doing.

Tillett, who Fletcher describes as having a "bubbly" personality, would have celebrated his 25th birthday on October 15.

He had graduated from Morehouse College, a historically black, all-male school, in 2009. After spending a year searching for work, he was accepted into the management training program at Enterprise Rent-A-Car.

Fletcher said her son was just starting out. He had recently bought his own apartment and passed Enterprises' management exam and was subsequently promoted to an assistant manager, after nine months.

Family and friends who were at the press conference described Tillett as a sociable person that knew how to cheer people up.

"He was always having a good time, always smiling and making jokes," said Shedonna Burleson, his best friend.

Police said if anyone has information regarding the murder of Tillett and the person or persons responsible they are encouraged to contact Detective M. Applegate or Sgt. A. Burke, Criminal Gang Homicide Division, at (213) 485 - 4341 or on weekends and holidays at (877) 527 - 3247. Tips can also be sent via text message to 274637 with the word "LAPD" and your message.