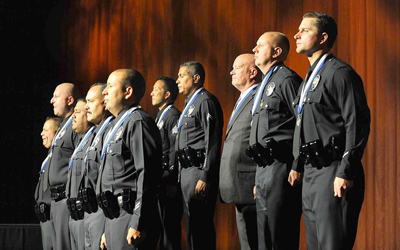 A group of Los Angeles police officers received the department's highest honor for bravery in the line of duty Thursday.

The Medal of Valor is awarded each year to a handful of the LAPD's nearly 10,000 officers who have showed "bravery or heroism above and beyond the normal demands of police service."

As in past years, the Los Angeles Police Foundation, which raises private funds for the department, hosted a gala luncheon in Hollywood to celebrate the honorees. In a blending of reality and TV fantasy, the ceremony was hosted by Regina King, an actress who plays an LAPD detective in the drama series "Southland." Several members of the City Council, other elected figures and many senior police officials, along with hundreds of guests, attended the event.

"In a town where you see fictionalized accounts of this on TV, it's great to see the real thing. It's incredible to know that LAPD officers risk their lives every day to give us a sense of security," council President Eric Garcetti said.

The 10 officers who received medals this year were involved in three incidents. One occurred early on a November morning in 2008 in the LAPD's Southeast Division, when Officers Owen Berger and Thorsten Timmermans, along with now-retired Sgt. Dan Gardner, responded to a call for help involving an armed man who had taken people hostage.

The house was dark and quiet. At the back door, the officers encountered a group of women, who, in whispers, tried to convince them that nothing was amiss. When Berger informed the women that the officers would have to check the place anyway, one of them bolted back inside.

Berger entered and saw a man forcibly restraining the woman. Another man opened fire on Berger from down a darkened hall. A bullet pierced the officer's forearm, forcing him to switch hands to return fire. Gardner and Timmermans joined the firefight, pulling Berger to safety and holding the suspect at bay until more officers arrived.

In a violent encounter in 1996, Officer Custodio Ponce was working on a gang suppression detail in the LAPD's Hollenbeck Division when he encountered a suspected gang member drinking a beer in the middle of the street.

The man took off running and turned to look back, revealing a gun in his hand. Ponce and his partner gave chase down a long driveway, where the man began shooting. Ponce was hit twice in the hip and leg, but remained in the firefight and fatally shot the man. Ponce, who grew up in the Hollenbeck area, returned to full duty a month later.

In the final incident, in 2008, six Hollenbeck narcotics cops - Officers Jose Salazar, Benjamin Aguilera, Rudolfo Rivera and Roy Reza and Dets. Daniel Hanabusa and Ralph Acosta - were in the third day of conducting surveillance on a location they suspected was being used to manufacture and sell drugs.

Seeing several key drug dealers arrive, the team decided to make a move. Hiding in the back of a moving truck, the officers positioned themselves at the back of the location, breaking down the door when their orders to surrender were refused.

Hanabusa, the first in the door, was met by heavy gunfire. A bullet struck his helmet inches above his eye, and another hit him in the knee. Salazar dragged the injured detective out with one arm, while firing at the suspect with his other hand. The rest of the group joined the fight and managed to keep the man from escaping. The man eventually killed himself.

Some of the officers honored at the luncheon spoke of the surreal sense of awareness that hit them as the event unfolded.

"I had made hundreds of pedestrian stops before," Ponce said. "This is the one when the devil popped up and everything went south."