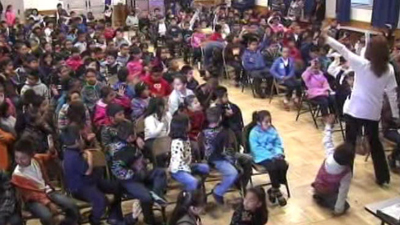 When asked at an anti-bullying assembly Monday morning who had ever been bullied, more than three-fourths of the elementary school students' hands shot up.

Next, the bullies were asked to identify themselves, and a few hands rose apprehensively.

"We are going to help you know what to do and change your behavior," said Monica Harmon, a public safety advocate and long-time Los Angeles Police Department volunteer who sought LAPD's support last year to begin an anti-bullying campaign.

Harmon has spoken to more than 15,000 students during the past year at elementary, middle and high school assemblies, and has also led parent groups and town hall meetings.

"Our whole mission is to empower the kids so they know what to do when approached by a bully," Harmon said.

"Whenever we have people talking to our kids about what is the right thing to do, it's always beneficial," said Trinity Assistant Principal Jorge Villalobos, who brought in Harmon and LAPD as a supplement to the behavioral assemblies the school is required by LAUSD to put on twice a year.

Bullying is harder than ever to abate, as students' increased use of social media and technology heightens the number of platforms on which bullying occurs, Harmon said.

"No one's educating them on how to use social media," Harmon said.

Fueled by the stories of Tyler Clementi and other bullying incidents that ended in suicide-some of which occurred via social media sites-Harmon saw a need for better education about bullying in Los Angeles schools, where "nobody was talking about it."

LAUSD's bullying protocol steers away from using these high-profile suicides as an impetus behind anti-bullying programming, as they "don't want to instill in the community a sense of contagion" or "glamourize" these incidents, said Holly Priebe-Diaz, intervention coordinator in the LAUSD office of Human Resources.

In these cases where kids commit suicide, other factors like mental health were usually at play, Priebe-Diaz said.

Several LAPD stations and bureaus have offered their support to Harmon, and officers chip in with advice and testimonials at assemblies.

"Kids will be kids. They'll remember it today, they'll forget it tomorrow, so we just need to continue to spread the message," said Jorge Rodriguez, the LAPD Newton Area Commanding Officer who spoke at Monday's assembly and has attended others in the area. "Bullying is not good, bullying is not okay, and it's not accepted."

In the case of Magnolia Science Academy #5 in Hollywood, the message wasn't forgotten.

Students began a poster campaign and put on plays about anti-bullying in the weeks following an assembly Harmon led there in December.

"They're keeping the ball rolling," Harmon said, "and it lets us know what we're doing is worth it."

But Harmon is only a volunteer and after the next scheduled assembly in April, she hopes organizations will step in and help take over the project, with the ultimate goal that LAUSD will implement official anti-bullying assemblies at the beginning and end of each school year.

LAUSD updated their extensive district-wide bullying protocol in 2005, and has several training and education initiative in place, including assemblies for students, Priebe-Diaz said.

Bringing in speakers like Harmon is at the discretion of individual school's principals, Priebe-Diaz said.

A partnership between LAUSD, LAPD and the police chief's office focusing on bullying is in the works.

"It's a constant effort," Villalobos said. "We have to reinforce what we already taught them over and over again."