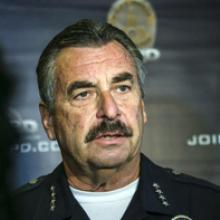 An LAPD commander says others in the department falsely concluded that he gave a blogger information on a horse deal involving the daughter of Chief Charlie Beck. Above, the police chief. (Irfan Khan / Los Angeles Times)
Richard Winton
LA Times

A Los Angeles Police commander is suing the city, alleging he was the victim of retaliation after top police brass falsely concluded he leaked information to a blogger for a story that said LAPD Chief Charlie Beck approved the department's purchase of a horse from Beck's daughter.

In the lawsuit claiming racial discrimination and retaliation filed Monday, LAPD Cmdr. Patrick Smith accused Beck and other police officials of acting against him after Jasmyne Cannick, a political consultant who also writes a blog, wrote her story.

The horse, George, was purchased in 2014 from Officer Brandi Pearson, Beck's daughter. At the time, Smith was commanding officer of the department's Metropolitan Division, which includes the mounted unit in which Pearson served.

The suit alleges the LAPD subjected Smith to fabricated internal affairs complaints, searched his office and took files from him, including one he planned to give to the department's inspector general. The file contained his handwritten notes questioning whether the sale of the horse by Beck's daughter was legal and ethical.

Smith's attorney says his client was never the source of the leak to Cannick. "The only correlation between Cannick and Plaintiff is the color of their skin," wrote attorney Gregory Smith in the suit, adding that his client had never met or communicated with Cannick. Smith and Cannick are black.

On her blog Thursday, Cannick said the LAPD commander was not her source for her story on the horse. Following Cannick's story in 2014, media outlets across the region, including The Times, reported on the sale.

LAPD Capt. Andrew Neiman on Thursday said the department does not comment on pending litigation but will address the allegations in court. He noted Smith remains an active commander in the LAPD.

The suit notes that Beck signed a document approving the $6,000 payment to his daughter.

The lawsuit alleges that Smith, who now works in the LAPD's training division, has been ostracized by the department after top officials discovered he planned to report the possible misconduct to the inspector general.

The suit also alleges that an internal employee tracking system claims he is under criminal investigation, even though he is not.

Smith's suit is the latest in a long line of lawsuits by officers and command staff alleging they were mistreated by LAPD management during Beck's tenure. Some of the suits have been rejected, but others have proved costly to the city.

Monday's lawsuit alleges that the chief and Deputy Chief Deborah McCarthy, who oversees internal affairs, dislike Cannick because she has written critically about Beck's administration. The furor surrounding the horse ignited questions as Beck was seeking reappointment to a second term.

While Beck's signature appeared on the approval of the purchase, Assistant Chief Michel Moore said the chief had no involvement in the evaluation of the horse's qualification or value and that the signature was a formality.